Family and Travel Open the World of Librarianship to MLIS Graduate 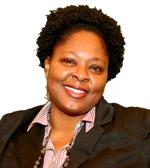 “Focus on people. Libraries are about people.”

Tameca Beckett has packed a lot into the last 10 years and to hear her future plans it looks like that trend will continue for at least the next 10 as well!

Tameca’s library career grew out of experiences she had at her own library. As a mother with three young children, Tameca and her family would hop on roller skates or bikes and head over to the Laurel Public Library in Delaware. They would frequently check out upwards of 50 books at a time and participate in many of the youth services programs this small rural library had to offer. It was no surprise, then, that Tameca happily took the opportunity to apply when she noticed a staff job posting at the library during one of her weekly visits. The Laurel Library staff was equally thrilled to have such a dedicated patron join them and Tameca became Laurel’s Circulation Supervisor. Just one week into this first library job, Tameca realized that she wanted to make library work a part of her life, and set about pursuing opportunities to advance her new career. Step one included getting her bachelor’s degree in Library Science at the University of Maine, Augusta.

While in her undergraduate program, Tameca further embraced new career opportunities by expanding her role at Laurel to include reference duties, participation in the Ask A Librarian helpline and youth services. In addition to her job at Laurel, Tameca also took on the 5 p.m. to midnight shift in the Special Collections and University Archives at the University of Maryland Library. This position served a two-fold purpose for Tameca as it not only helped her become familiar with the Library Special Collections field, it also offered her the opportunity to gain skills in library administration and budgeting that she would use in later librarianship roles.

Love of Travel and Conference Attendances Lead to New Roles

In addition to the public library and special collections jobs, Tameca also used her undergraduate academic program to expand her library work experience. Raised in a military family, Tameca grew up moving to different places throughout her childhood and this upbringing instilled in her a love of travel that remains with her today. She decided to combine this love of travel with her library work after hearing Jane Mayer speak about International Librarianship and the Lubuto Library Partnership at a library conference shortly. She based her undergraduate capstone project on helping the Lubuto Library design STEM curricula for their libraries. In addition to helping her finish her degree, this project reaped further career benefits for Tameca as she ended up implementing these same curricula in her own job at the Laurel Library.

A second library conference presentation also opened another career opportunity for Tameca when she attended a presentation on Digital Library Spaces. She brought the idea home to Laurel, fought for the funding to start her own tiny space and watched it grow organically to the point where she was recognized with the 2013 iEducate Delaware award. After joining the board of the Association of Small and Rural Public Libraries, this project continued to move Tameca along her library career path when she and the group’s president turned it into a presentation for the 2017 ALA conference in Chicago.

Despite her busy professional life, Tameca still found time to continue her education by enrolling at the San José State University iSchool. Tameca chose the iSchool because the online format allowed her the flexibility to fit her academic schedule around her family and work life. After earning her MLIS in 2018, Tameca returned to the Laurel Library and culminated her public library career in the role of Executive Director for the very same library where her career journey began. As Tameca and the staff like to say, Tameca ended up working in every job at that library!

Today, Tameca serves as the Reference and Access Services Librarian for Delaware State University. Her current role fulfills her MLIS graduation goal of “having more impact” by recruiting teens and college students to work in the library field. By Tameca’s count, so far she has signed up four new potential librarians…one of whom is her oldest daughter.

PhD in her Future

Despite her current success, Tameca is not about to slow down. In order to continue doing what she loves—library outreach work to youth—Tameca has decided that teaching is her next path. She is currently pursuing her doctoral degree (Ed.D) in Educational Leadership at Delaware State University. She plans to use her future role as a professor to do what she considers to be most important—focus on people. As Tameca says, “when you do that, there is no way you can go wrong.”

Credits Family and iSchool for Her Progress

Tameca credits the iSchool, who “worked with her every step of the way” through her MLIS program as well as her three children, who accompanied her on her educational and career journey, for getting her where she is today. Tameca encourages everyone to consider a career in librarianship because libraries contain a world of possibilities. As she tells her students, “everything you want to do you can do in a library.”