“Although I would like to work with archives and historical records, the MLIS degree gives me the confidence to work in corporate environments as well.”

With a BA in history from Temple University, Amanda Mellinger faced the usual path toward classroom teaching. An exploration of alternative careers brought her to the National Constitution Center on Independence Mall in Philadelphia, Pennsylvania, where she secured an internship in the education department of the museum. She helped plan teacher workshops and activities for visiting students. Happily, this first job-out-of-college experience expanded Mellinger’s vision for her professional future. For someone who loves history, managing collections of historically significant primary source materials would be a dream job. “I liked working in the archives a lot more than the museum. It seemed to have much more potential,” she foresaw.

Mellinger soon moved to Silicon Valley and started investigating local graduate programs in which she could apply her passion for history. San José State University School of Information – which includes substantial offerings in archiving and preservation, in addition to a wide selection of library courses – caught her attention. “I enrolled in the MLIS because I didn’t want to rule out special collections libraries as a possible career option. The iSchool is ALA accredited and offers a variety of foundational courses in archiving.”

The scheduling flexibility of the iSchool’s all-online curriculum, paired with opportunities for local internships and part-time work, gave Mellinger the incentive she needed. She entered the program in fall 2014 and expects to complete the MLIS degree in spring 2017 with an emphasis in archives and records administration. “Although I would like to work with archives and historical records, the MLIS degree gives me the confidence to work in corporate environments as well. After one year of work experience, I can sit for archivist certification exams” conducted by the Academy of Certified Archivists.

During her first semester, Mellinger recalls the impact of Colleen Cook’s Career Colloquia. Cook’s emphasis, “’Make use of your time. Get hands-on experience,” became Mellinger’s guiding principle. “I was concerned that my first semester was in progress and I was already behind!”

Living With History As An Archivist

She jumped into the search for work experience and quickly landed a volunteer curator gig at History San Jose (HSJ), a non-profit that receives, processes and manages primary source materials donated by notable local residents. History San Jose is staffed by three people who support historians’ on-site research in the archives.

“Across the street from Kelley Park,” a San Jose landmark, “there’s a giant warehouse of original documents. I worked on processing the collections of Ella Dettenhamer.” Dettenhamer’s father, Joseph, was a German immigrant and an early orchard grower in the Santa Clara “Valley of Hearts Delight,” Mellinger recounts. “Ella grew up on the farm and later worked at Moffett Field when things were being developed in the area” as it was transitioning to “Silicon Valley.” “She left boxes of correspondences, photos and other documents, and her estate donated them to History San Jose because she had no surviving family.”

Mellinger’s next part-time position took her to the California Room of the San Jose Public Library. “Most people use the California Room for the Sanborn maps and city directories to look at properties, both for personal and business reasons. The historic book collection is popular with local historians as well,” she notes.

“In the California Room, I wasn’t processing a new collection. The focus is on scanning and digitizing existing documents.” Because she wants to have hands-on training in a range of archivist responsibilities, Mellinger says she “tried a bit of everything. I expect I’ll be doing computer and technology-based work in the future, so this gave me real practical experience.”

Even as Mellinger worked in the California Room, she took on another enviable position at the Hoover Institute. “I work in the processing room, going through the new collections,” she says. “I organize unprocessed documents and materials and create their ‘finding aid’ – an archivist term meaning I list what’s in each folder or box so researchers can go right to it,” Mellinger explains. For example, “Online Archive of California is where California archives can upload completed finding aids. When archivists are done processing the collection, they create the finding aid for researchers to find the materials they’re looking for.” 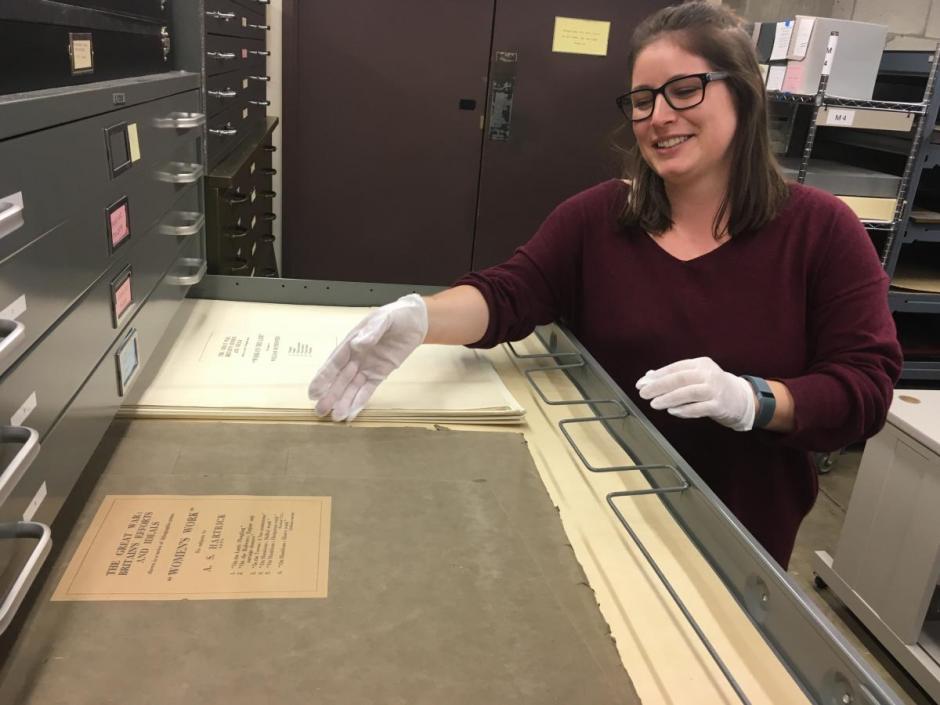 After a very active year as a paid archivist intern, in June 2016 Mellinger was asked to stay on as a permanent part-time employee.

Her California Room experience has turned into something more permanent as well. Mellinger’s supervisor took personal interest in advancing the new archivist’s career. “She said, ‘There’s an opening for an archivist down the hall,’ and encouraged me to apply.” Mellinger got the paid position – Project Archivist at San Jose State University (SJSU), responsible for digitizing everything in the collection associated with Japanese internment in California during World War II. It’s an ideal opportunity for a historian. Mellinger is the only SJSU representative on a team of archivists from 11 California State University campuses dedicated to cataloging Japanese-Californians’ wartime experiences through the CSU Japanese American Digitization Project.

“There are two collections at San Jose State. I scan images, catalog items, harvest the metadata and send everything to the head cataloger” for all the participating universities, Mellinger says. To enrich her connection to the real lives she’s encountering through archival materials, Mellinger has learned a great deal through guided tours at the Japanese American History Museum in San Jose as well.

Together, her part-time jobs at Hoover Institute and SJSU Project mean Mellinger’s working a full week – in addition to finishing up her MLIS degree. Mellinger is also a leader of the Society of American Archivists’ San Jose Student Chapter (SAASC). “I’m secretary of the chapter, which means I lead the web team and manage our online presence – including blogs, Twitter, Facebook, and marketing events.” This year one of Mellinger’s goals is to create a ScholarWorks page, currently under development.

In working toward her MLIS, Mellinger has “focused a lot on the archiving and records management pathway” while fortifying her career options with courses in grant writing, reference and information services and marketing. “Many of the archivist positions are grant funded,” she points out. Moreover, “the field is changing – it’s important to be able to help researchers and do outreach to get people the information they need.” Mellinger notes that many repositories of historical data are open and accessible – “researchers can actually see what’s in the archives and get to the primary sources.”

In San Jose, Mellinger’s starting to realize her dream of making a living from her passion for history. “My favorite part of being in archives management is the discovery of historically significant original source material,” she affirms. “This is what I wanted to do.”