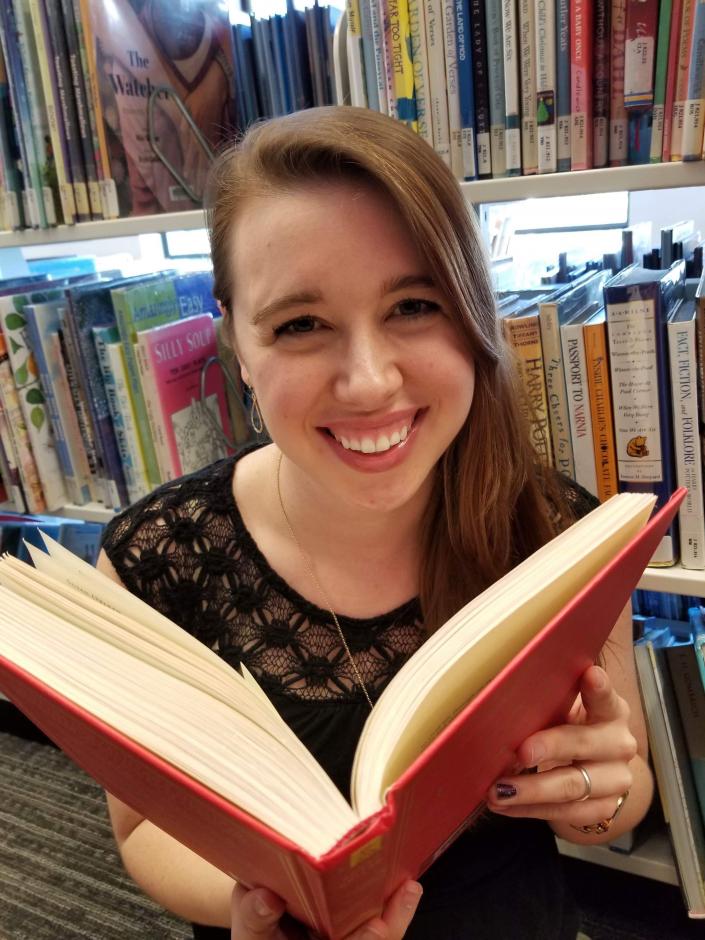 “Don’t be afraid to live in the academic gray areas. Take the opportunities this program has to offer and run with them.”

Havilah Steinman began her San José State University MLIS studies in spring 2018 with some definite ideas about her career path. After seeing all that the iSchool had to offer, however, she quickly realized that the field of library and information science holds opportunities beyond what she had imagined in her initial career plans. As a result, this San José State University Student Research Journal staffer and iSchool student blog writer is in an “open relationship” with her career track at the iSchool. Judging from her accomplishments during her time here at SJSU, Havilah’s expansive approach to her academic plan and career search is paying off in spades.

Coming from a background as a paralegal, Havilah was looking to follow a pathway that incorporated the study of law while allowing her to teach as well. She chose the academic librarianship track with the idea of becoming a teaching librarian on a law school campus. Fast forward to today, and Havilah finds herself in completely new career territory as she is poised to start her two-unit summer internship at the Zoological Library of the San Diego Zoo Safari Park. Although many factors have played a part in getting Havilah here from the career pathway she had initially envisioned, two guiding principles in Havilah’s academic journey emerged: 1) actively exploring her interests, and 2) seeking out opportunities to network with people working in a wide variety of areas in the library field.

After two semesters as an iSchool student, Havilah’s explorations began when she decided to pursue her interest in the teaching aspect of librarianship by taking on the role of peer mentor. A peer mentor is a current iSchool student who guides students who are new to the iSchool program. Peer mentors play an important role because they not only act as a resource to help students navigate the program’s online environment, they also provide helpful advice about navigating specific courses and managing study time. Peer mentors are available to new students for any and all questions during their first semester and are a valuable resource because they understand the pressures of balancing work and family with the iSchool academic requirements. Havilah embraced this role because it allowed her to employ her teaching skills, meet new students, and work with SJSU MLIS alumna Debbie Faires, who is also the iSchool’s director of online learning.

Actively Exploring a Variety of Interests at the iSchool

Working with another iSchool faculty member, Vicki Steiner, led Havilah to seek out an interest group that drew on another one of her interests—the law. On Dr. Steiner’s advice, Havilah joined the Southern California Association of Law Libraries. This affiliation immediately paid off as her involvement led her to apply for and win the group’s student scholarship. Along with the financial support it offers, Havilah names the validation of her academic work as an equal benefit to this award. She commends Dr. Steiner for encouraging her, and without Havilah’s willingness to pursue her interests and seek out both a connection to her instructor and to SCALL itself, this opportunity would never have become what is now a milestone in her academic journey.

Havilah is not simply sticking to the interests that stem from her background. Using her initial connections as a jumping off place, Havilah decided to “cast a super-wide net” in regards to her professional pursuits. She began to seek connections with local groups, regardless of their focus, so as to allow her to make in-person contacts at group meetings. This “wide-net” approach led her to attend a meeting of the SJSU student chapter of the Society of American Archivists.

In keeping with her embrace of new opportunities, Havilah saw that there were group leadership positions available and jumped right in by becoming the group’s chairperson. This latest opportunity brings us to her journey’s current iteration, as she learned of the San Diego Zoo Safari Park’s Zoological Library internship through her involvement with this student group. She names her SAA leadership position, coupled with her recent scholarship award, as important factors in helping her stand out as a strong internship candidate. She is now off to spend the summer among the park’s zoological archives (and the giraffes, too!).

In addition to her roles at the iSchool, Havilah is also currently volunteering at the Carlsbad Library. Havilah sees this position as valuable not only for the library work experience but also because hiring companies are increasingly interested in a candidate’s volunteer contributions, as she herself discovered during a recent job interview.

After reviewing Havilah’s academic career, it is clear that her enthusiastic embrace of the opportunities the iSchool has to offer has opened up exciting new areas for professional engagement and expanded her fields of interest. Havilah says if she could talk to the Havilah Steinman that entered the SJSU iSchool in January of 2018, she would advise her to not feel pressured to set a fixed journey, but instead to “not be afraid to live in the academic gray areas.” As far giving advice to her fellow students for getting the most out of the iSchool, Havilah says, “It can take a few semesters to get acclimated, but once you do, RUN” with the opportunities.