“I never knew what the standards were, and now I understand more what needs to be done. I can take my knowledge and apply it to our collections and make sure we’re doing what we need to be doing.”

Lou Kramer brings her archival skills into the 21st century with the help of the Post-Master’s Certificate.

Lou Kramer is an analog girl in a digital world. She received a master’s degree in communications in the early 1990s, when there wasn’t a formalized film and video archiving school, and got her first taste of archives while working in a UCLA film and video collection. She then moved across the country to be archives manager at the Lynn and Louis Wolfson II Florida Moving Image Archives, the “official moving image repository and archives of the State of Florida.”

With recent changes in the scope of the Wolfson collection, Kramer realized that she needed to learn more about digital archives, access and preservation. She researched the San José State University School of Information, looked at the course offerings and discovered the Post Master’s Certificate (PMC) program, where she could educate herself on her own time. She signed up, completed the program and now has a wealth of archival knowledge to put to good use at the Wolfson.

A Career in Digital Archiving

The Wolfson archive houses materials from South Florida news stations – glamorous Miami Beach footage from the 1950s, stock footage and news tape dating from the 1970s to early 1990s. “Our users are documentary film producers,” Kramer says. “And we license our footage so we operate as an archive and also a stock footage provider.”

Kramer worked at the Wolfson for ten years until 2006, when, in need of a change, she transitioned into a public library program coordinator role. “I got to see the interaction between librarians, circulation staff, the public, how everyone interacts,” she explains. “I was organizing speakers, book discussions, movies, music events – anything that was a publicly accessible program that I could put together free of charge.” 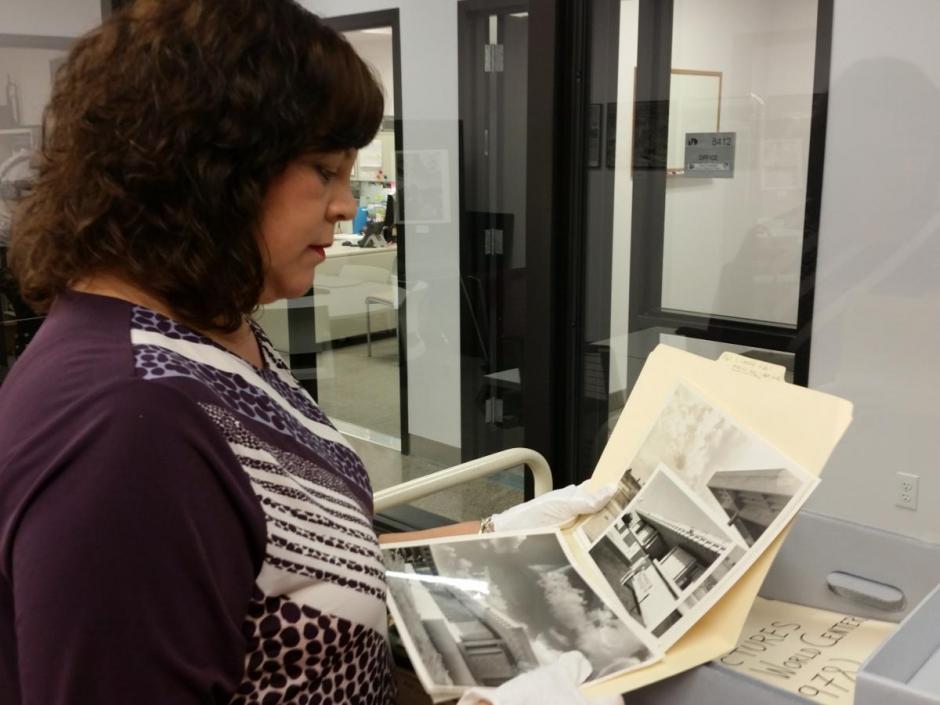 But then the library restructured positions and eliminated Kramer’s role. Luckily, the Wolfson called and offered her back the role of archives managers, with a twist:  “I went back to the exact position I was in but with a little more administrative power,” Kramer elaborates. “I’m a decision maker within the organization now.” She immediately began making decisions that would make the archive more accessible. “That’s one of the things I learned at the library: you need to have people coming in to use your facilities, your materials – books, videos, attending programs – you need people to come in and utilize your collection.”

While she was gone from Wolfson, the archive went through a restructuring, with new administration, leadership and additions to the collection through joining forces with Miami Dade College and housing their archives. The new collection includes photos, documents, brochures, newsletters and all kinds of materials from the college. Kramer is pictured, right, sorting through a collection of Miami Dade photographs.

“We went from moving image materials to an institutional archive,” Kramer says. “I didn’t really know what to do with records, photographs and all this printed matter. Then about five years ago we really started diving into digitizing our collection and have been nonstop ever since. I didn’t know what to do with digital assets either, I’d never dealt with them before. My education was late 20th century film and video, I needed a digital background now for the 21st century!”

To keep up with the changes, Kramer started educating herself, studying the Library of Congress’ (LOC)’s digital preservation blog, with limited results. “It wasn’t formal enough for me to follow or retain anything, it was superficial knowledge,” she recalls. “If it was going to stick, I needed to take a class that would force me to pay attention, dig around, read more, and get information from a vast number of sources, not just the LOC.”

Steps to Success via the iSchool’s PMC Program

Kramer started the post master’s program in Fall 2014 and finished in Spring 2016, following the Digital Archives and Records Management pathway. Still working 40 hours with a long commute to work she took one class per term, which allowed her to focus on the coursework.

“I was in it for was the education first and foremost. The way I took the courses worked perfectly…it made sense, I didn’t feel like I was jumping around, one class related to the next and I built on the knowledge base as I went along.”

She cites INFO 203, online learning, as the perfect introduction to the iSchool’s learning environment, allowing her to become comfortable with new tools and technology and, even more importantly, with collaborating with classmates and instructors online.

“It was also helpful for me to share my past experiences with up and coming students,” Kramer says. “Engaging with classmates was helpful for me, because it made me realize what I needed to learn and where I needed to be.”

“I find myself having to talk to librarians and archivists, and there’s a certain terminology that’s utilized. Now I feel like I know what they’re talking about,” Kramer adds. “Metadata schema, all the different ways to encode collections, cataloging. I can have better conversations and can collaborate with people.”

Kramer’s ultimate goal for the Wolfson is to have everything digitized, but with around 20 million feet of film and 30 thousand hours of videotape, there’s a lot of work to be done. 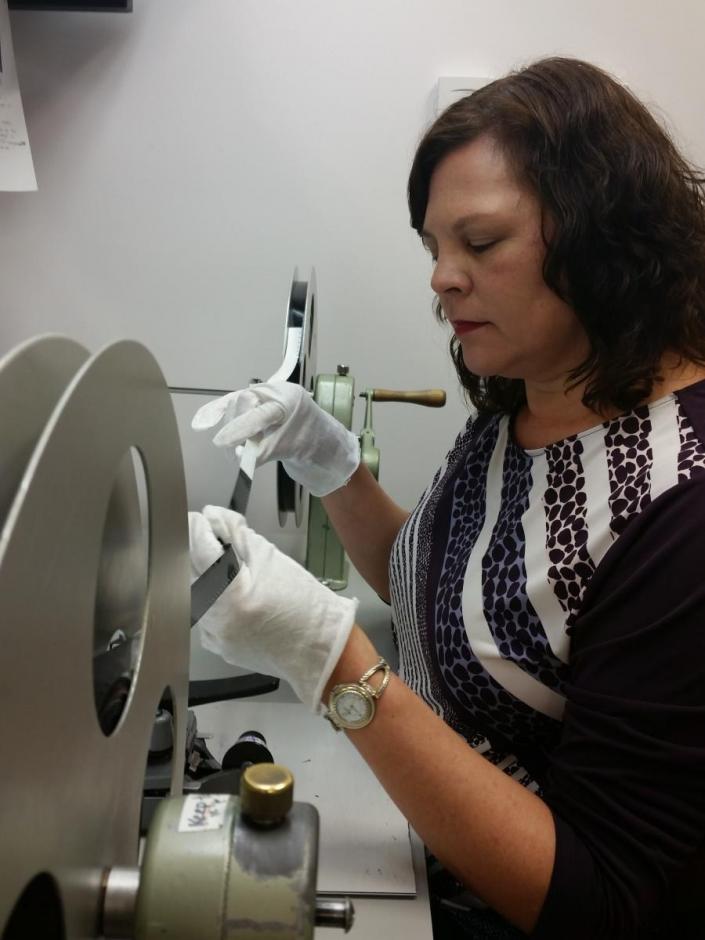 “With moving images, you have your analog version, the actual film and video print that you can see,” explains Kramer, who is pictured right, inspecting 16mm tv news film. “With the digital material it’s just a file name and number, not something you can hold in your hand. My original experience is in physical videotape and film material. I’m more comfortable processing that than digital – it was another reason for taking classes, so I could get over that.”

“The digital curation class was perfect to take last in the pathway: it encompassed everything I’d learned from the very first day,” Kramer adds. A semester-long group project allowed Kramer to use photographs from the Wolfson college archives and create a data curation plan. She presented the finished project to her director, who used some of the recommendations on curating digital photo sized prints.

“I never knew what the standards were and now I understand more what needs to be done. I can take my knowledge and apply it to our collections and make sure we’re doing what we need to be doing.”

Kramer’s learning outcomes assessment tells the story of why she needed the certificate, and how she’s been able to immediately apply archival processes and best practices to her work at the Wolfson.

The Wolfson was recently invited to participate in creating an educational website of all things related to Miami Beach, and Kramer is excited about the possibilities. “I’m dealing with a lot of librarians and special collections archivist, and I feel good about it!”

“It’s a lot of work, we’re busy, sometimes it’s exasperating, but ultimately you go home and turn on the Discovery Channel and see a production that you provided footage for – and that’s exciting.”