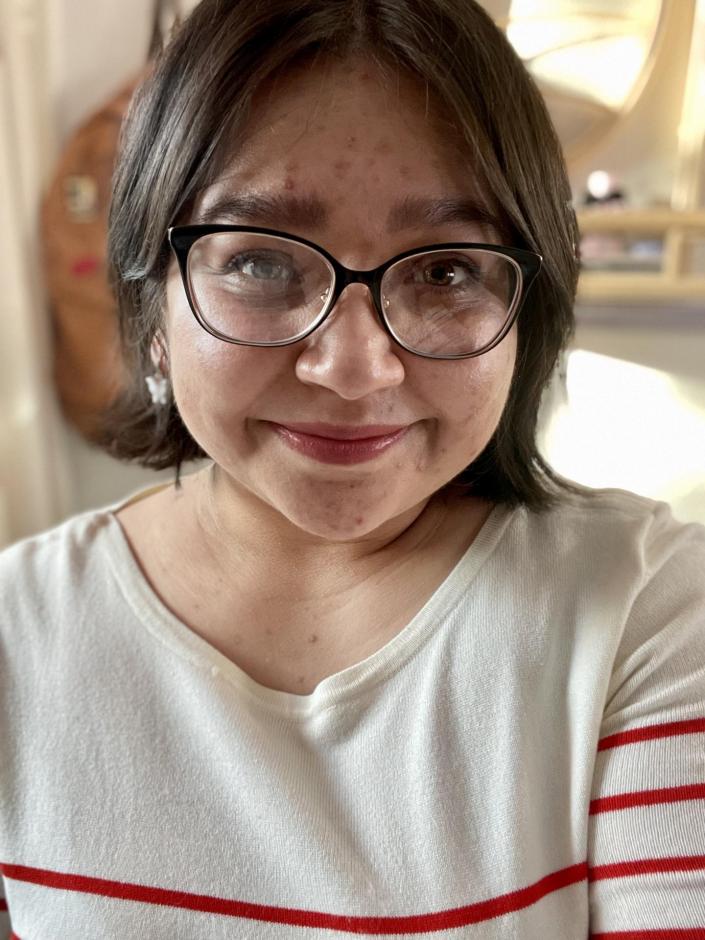 “Many of us are first-gen grad students, so there’s a lot of pressure to live up to the expectations of our family and peers. Don’t be afraid to explore all the different fields LIS has to offer, and keep in mind that the Latine community is proud of you no matter what.”

Briana Alvino is a first-generation and first-semester grad student at the iSchool. With a background of family members who are SJSU alumni, Briana found the MLIS program after finishing her undergraduate degree in English at Fresno State. As a Special Sessions student, Briana takes classes online from her home in Central California.

“My interest in libraries is relatively new,” Briana said. “I have one relative who graduated from this program and she enjoyed it a lot. Today she works in marketing – but I was just really interested in reading about cultural preservation archival stuff, really.”

For Briana, that interest in cultural preservation really sparked four years ago for an unexpected reason.

Like many people over the last few years, Briana wanted to find out more about her family history because she took one of the many popular home DNA tests that exist today.

“I’ve always known I was Mexican. My parents are Mexican,” Briana laughed.  But what she did not know until taking that test was that her family is over half indigenous. When people find out what culture their family belongs to, they often become fascinated by the specific regions and history that comes with knowing their own family tree. But for Briana, and many other indigenous Latine people, learning what people groups her family belonged to was another story.

“You know, there’s no way to find out where I come from, exactly. We lost our culture [that existed] before the Spanish arrived, so that’s kind of what got me even more interested in cultural preservation because of its importance. And you kind of feel this particular feeling. I can’t really describe what would have happened if our languages and some aspects of our culture were not destroyed or lost.”

Briana is proud of her latine heritage, but she admits that her experience in academia as an Indigenous Mexican American student has not always been easy.

“If I listed all my negative experiences due to my heritage, I would be here for a while. My most negative experience would be feeling like I didn’t belong in this country, even though my family and I are natural-born citizens. People assume many things about the Latine community; they believe we’re lazy and uneducated. As a Latine, you have to work twice as hard to achieve things that are conventionally easier for our white counterparts.”

As an undergraduate student at Fresno State, this was amplified by much of the “America First” ideology spouted by certain groups that made minority groups feel threatened on campus.

The Road So Far

Being a first-generation graduate student comes with its own unique challenges.

“We’re halfway through the semester, and everything’s going good, but you’re still experiencing the pressure. I can’t screw this up, you know, for myself, of course, but also for my family, they’re depending on me to finish this – sometimes it can be a little nerve-wracking.”

As a new student at SJSU, Briana admits that she was originally really concerned about learning about the level of experience that it seemed like all of her fellow MLIS students had.

Briana’s previous experience as a recent English literature grad had little to do with understanding today’s libraries beyond her own papers and class research.

“I was kind of worried at the beginning like, ‘Well, how am I supposed to learn all this stuff if I don’t know about any of it in the first place? Are they going to like to teach me everything from the beginning? Have I made a mistake?’”

Thankfully, as her classes went on, Briana’s concerns and imposter syndrome faded, and she has not felt like it is a mistake that she is there. She has come to realize that her fellow students have varying backgrounds and levels of experience in the library field.

Though she has only just started her MLIS program, Briana hopes to work in a museum or similar cultural community center, potentially in cultural archives.

Museum archives and museums, in general, can have a mixed history, especially when it comes to preserving other cultures, and a common complaint is that the result can often mean that many objects are left in boxes, buried away, and unseen. Learning how museums can still educate their communities and celebrate these cultures is an ongoing process.

“I think a good example I’ve seen is the British Museum, as much as I have my own opinions about that. They do have their collection online that people can look at with all the information, and it will say directly if it’s not out on display or not. I think that’s helpful for people because even though it’s not on display, it’s still accessible, even from a distance.”

Some other key ways that people preserve latine cultures can be found outside of the museum and traditional space.

“For my community, what I’ve started to see now is that a lot of people, particularly the younger people in Mexico, are now trying to reuse a lot of our languages and relearn them. It’s this whole movement behind abandoning our Spanish roots and rerouting ourselves to our indigenous roots using languages and a lot of our spirituality.”

Part of this means, for many young people, abandoning Catholicism – the main religion in Mexico today.

“It’s the acknowledgment that our learning of our current language or current religion was forced upon us. And it’s time that we took that into our own hands and started learning about our indigenous roots because I think a lot of that’s forgotten.”

As someone who hopes to work in museums one day, Briana notes that not many museums seem to highlight latine cultures in their collections, which could be remedied across the board to celebrate and promote cultural diversity.

“I just know that a lot of us would like to see ourselves represented in some way. It’s like when you go to a really big art museum. All of these famous artists are from Italy, or are French, and that’s wonderful, but I’m not seeing myself, you know. When you look at the artwork and you can see parts of yourself and parts of your family, it makes a difference.”

Representation matters, whether it is in art, collections or even in grad school programs – one person’s choice to attend school could inspire their friends or family or other people in their community to realize that continuing their education is an option for them, too.

Briana offers this advice to prospective students at the iSchool: “Many of us are first-gen grad students, so there’s a lot of pressure to live up to the expectations of our family and peers. Don’t be afraid to explore all the different fields LIS has to offer, and keep in mind that the Latine community is proud of you no matter what. To any Latine student in LIS: you have already surpassed the common stereotypes that have been forced upon us for years; that is already something in itself to be a great achievement!”

Right now, Briana is reading two books that center on latine culture that she would love to recommend.

The first is Signs Preceding the End of the World by Yuri Herrera. “It’s a fantastic story embedded with Aztec mythology, specifically about the journey through the underworld, also called, Mictlán (think Dante’s Inferno or the myth of Orpheus).”

She also just finished rereading I Am Not Your Perfect Mexican Daughter by Erika L. Sánchez, which is being adapted on Netflix soon!