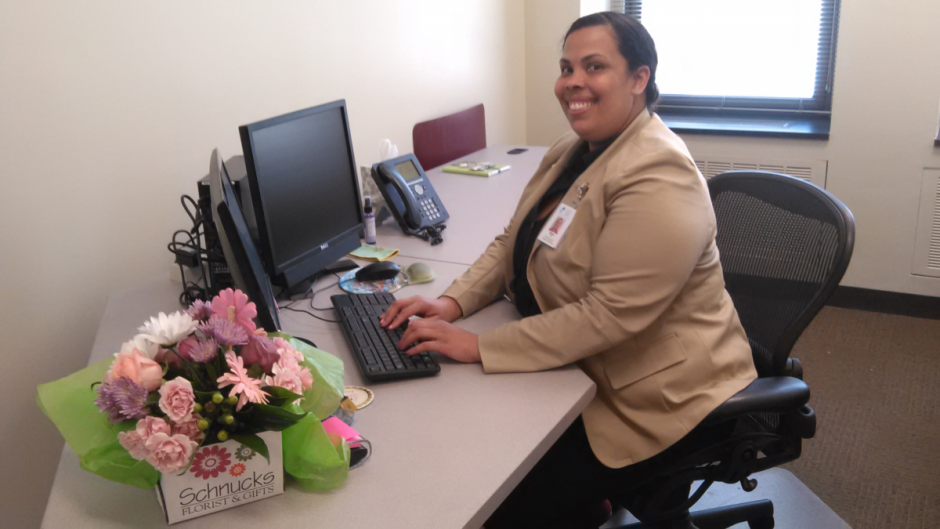 “One of the key things that has helped facilitate my career is good leadership and great mentors.”

Like many iSchool students graduating with a Master’s in Library and Information Science (MLIS) and seeking a first full time library job, Tiffany Davis started out small. Originally a shelver in the Berkeley, California, public library, Davis was hired as Regional Youth Services Librarian in the St. Louis public library after earning her MLIS. Just a year and a half later she was promoted to Branch Manager, and in May 2016 accepted yet another promotion—to Director of Branch Services. When asked about her whirlwind career trajectory, Davis is humble. “I’m a living testament to prayer,” she says. “I’m very grateful, because it doesn’t happen like that for most people.”

While working as a shelver in Berkeley, Davis was in school for a master’s degree in history. She didn’t see any career options that intrigued her, and determined that her future career was not in history but in research: she wanted to be a librarian. “I saw how I could incorporate my love and passion for research into the field, how I could help people find what they’re looking for,” she explains. “I can still do the research, which is what I love doing, but I can help people find what they’re looking for, because they may not have that skill.”

“And I haven’t looked back a day since!”

Davis knew that she needed the MLIS degree to be a librarian, and chose the iSchool for its excellent reviews, online accessibility and flexibility. She took a variety of courses because she wasn’t quite sure what specialization she wanted to go into.

Davis did make sure to take courses in children’s literature however. “I’m very passionate about children and literacy. It’s really an investment into the future for everybody,” she says. So after the degree, she applied for jobs as a youth/children’s librarian, found the perfect role, and made the move to St. Louis.

Librarian on the Move

Davis describes her first post-degree job as regional youth services librarian in the St. Louis Public Libraries as “wonderful and exciting…it was an amazing starting position.”

“As with any job,” she elaborates, “I come in and observe, ask questions, and learn the culture of the organization, the culture of the branch, who the primary patrons are and what their needs are. I like to see what’s broken, what’s not broken, what can be improved and what’s fine just the way it is. Most important [is] what the patrons need.”

The Carpenter library branch where Davis worked had a special room in the library tailored just for children: a warm, cozy, peaceful space. But what her patrons needed, Davis soon learned, was one-on-one encouragement. So, despite the challenge of families continually moving in and out of the community, she began fostering relationships with the young library users. “I tried to do that with all of the young people I interacted with,” she says. “Taking time out to remember their name, specific things about them, and following up on previous conversations.”

To facilitate programs and services to aid her young patrons, Davis served on the library’s Teen Services Committee and Steering Committee, and chaired the Youth Services Summer Reading Club Committee.

After a year and a half in the role, Davis, looking for a new experience, applied and was promoted to branch manager at the Kingshighway location.

“It was a complete job shift!” Davis say. “I went from my main focus being children and teenagers, anyone 21 and younger, to—everything. I did everything from adult services, references, helping with the children, collection development and day-to-day operations to keep the branch flowing.”

Davis enjoyed her new role at this smaller, even more community oriented branch, particularly as she still was able to work with children. “I never really saw it as leaving the children’s’ world, but being able to approach it from a new angle,” she adds.

Davis was also appointed chair of theDiversity Committee, collaborating with all of the branch managers to promote programs celebrating diversity. Davis’ role included developing special programs for Black History month; the Latino community programming; and other diverse additions to the library’s regular requirements.

Becoming an ALA Emerging Leader

“Being a branch manager and chair of the Diversity Committee brought my inner leader out,” Davis notes. “I now know firsthand how effective leadership can help motivate change and success in others.” The experiences motivated Davis to apply to the American Library Association’s (ALA) 2016 Emerging Leader (EL) program.

“I wanted a way to sharpen my leadership skills and make a contribution to the profession on a grander scale, in addition to building a relationship with other professionals who have that same drive and fire that I do.”

She won the honor, and is enjoying meeting and collaborating with other emerging leaders, including iSchool recent alumna Kayla Figard.

“The EL program has connected me with some of the most wonderful up and coming leaders in the profession,” Davis adds. “At the end of the work day, the wheels in my head are turning with ideas for the library.”

Davis relinquished her diversity chair role when she was promoted to director of branch services, overseeing 14 library branches in St. Louis. She still serves on the Diversity Committee though, in addition to her new responsibilities.

“I don’t really have a typical day because every day is different.,” Davis, pictured right in her new office, says.

Reaching a director role just five years after getting her MLIS and starting her first full time library job is a credit to Davis’ hard work and determination.

“One of the key things that has helped facilitate my career is good leadership and great mentors,” she says. “It was a lot to take in, but…having that support, that person you can lean on, talk to, coach you—that means everything because there are so many ways you can get lost, or not even get started.”

Davis wants to be a mentor herself, but has a lot of responsibility with her new job, and is still learning everything she can.

“My next goal is just to get comfortable in my new role,” she states. “In a field that is ever changing it is important to have leaders that can help facilitate the process as efficiently and effectively as possible.”