“I chose SJSU iSchool for its affordable tuition, flexible online program and access to high-quality faculty and graduate student research opportunities in the MLIS program. These continue to be my selling points when people ask me about the MLIS program at SJSU iSchool. This MLIS program afforded me a space to explore my questions about the role of public libraries in urban life.”

San José State University School of Information alumnus, former student assistant and LA county urban planner Jonathan P. Bell (MLIS, ‘17) grew up loving the public library. “I was a bookish kid,” he says. “My family encouraged education and reading.” As a youth, he cherished his local library—the County of LA branch in the city of Montebello—for its seemingly limitless offering of materials. Bell’s appreciation for the library grew as he did. During his undergrad years at East LA College and Cal State LA, he found work in LAPL’s Central Library. The library’s diverse setting and clientele helped inform his decision to pursue urban planning as a career and—years later—to pursue an MLIS at the School of Information. Says Bell, “Especially in the Downtown L.A. environment, I saw how the public library functioned as a welcoming and democratic space, warm in the winter, cool in the summer, where everyone is invited.”

When it came time for Bell (pictured right) to enter a graduate program in 2003, he briefly considered an MLIS. 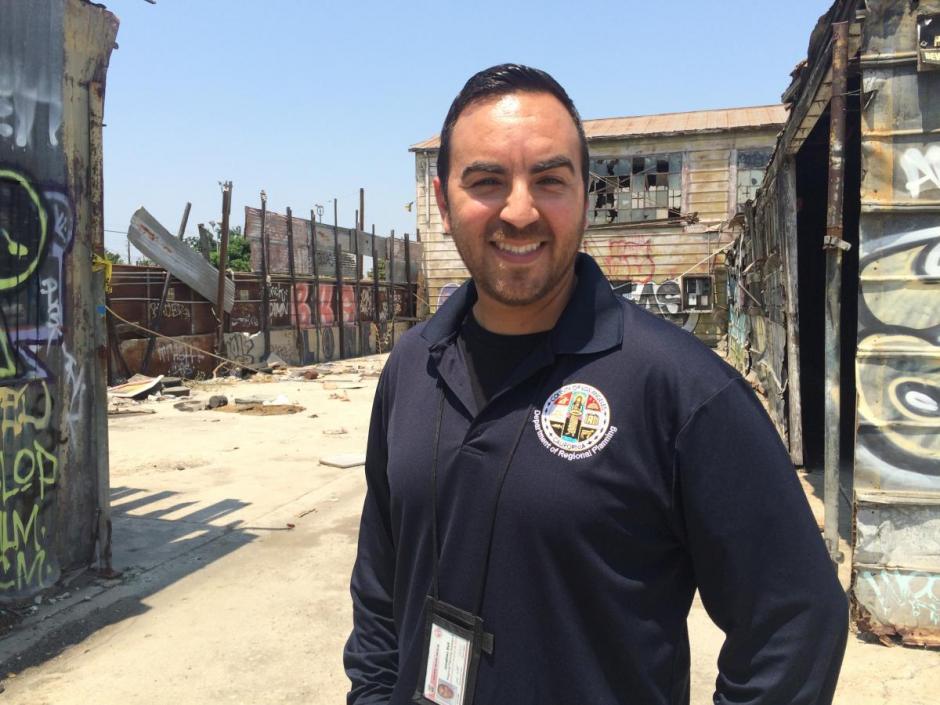 Says Bell, “My heart and my passion were in urbanism and cities, so I pursued the MA in Urban Planning at UCLA. Still, I never forgot the lessons of the library.” Bell joined the County of Los Angeles Department of Regional Planning in 2006, where he began to see the connections between city planning and city libraries. “In 2010,” Bell says, “I came back to address those connections and my questions about the role of public libraries in urban life, in the MLIS degree program at SJSU’s iSchool.” Bell continues, “I chose SJSU’s iSchool for its affordable tuition, flexible online program, and access to high-quality faculty and graduate student research opportunities in the MLIS program.” Bell speaks more in-depth about this in his e-Portfolio Statement of Professional Philosophy.

Student Assistant and Urbanist
During his time here at the iSchool, Bell served as a graduate student researcher on Dr. Anthony Bernier’s IMLS grant-funded research project, “Making Space for Young Adults in Public Libraries: Establishing a Research Foundation.” The team was comprised of different specialty groups, each with their own expertise. Says Bell, “I served as the graduate assistant for the qualitative research component, led by Drexel iSchool professor Denise Agosto.” The team sent 50 handheld digital cameras to 50 public libraries and asked staff and teen users to describe their impressions of the young adult library space through a series of survey questions. “Basically,” Bell says, “we asked them to show us what you want to show us, and tell us what you want to tell us. My core role was to analyze the transcripts and video data to develop a framework of spatial qualities that make YA library spaces enjoyable for young people.” The work Bell was able to do with Dr. Bernier was crucial not only to him but to the whole field. “The project was the first of its kind.” Bell enthuses, “a critically important contribution to development of evidence-based library spaces for young people.”

Student research opportunities are, again, but one of the benefits Bell saw in the MLIS program at SJSU. Says Bell, “The faculty, course offerings and student research opportunities at SJSU’s iSchool are unmatched. I had the opportunity to take courses with many of today’s leading LIS educators and practitioners.” Bell singles out Melanie Sellar, Dr. Debra Hansen and, of course, Dr. Anthony Bernier as being pillars of the School of Information and invaluable to his education and career. Laments Bell, “I wish I had the space to wax poetic about each professor and each class in the MLIS program that resonated with me. Perhaps I’ll do that in some essays in 2018.” Indeed, Bell writes essays and pieces about libraries, cities and urbanism, several of which are available to read at the following links: Mutual Aid at Lunch Time and 1992 Student Walkout at Montebello High School.

CLA 2017 & Planning a Bright Future
Bell admits that one of the few downsides to a 100 percent online education is the lack of close personal relationships you’d usually develop with an in-person cohort. “While I developed strong friendships in the iSchool,” Bell says, “the absence of face-to-face relationships made it challenging.” Conferences like CLA 2017 gave Bell the chance to catch-up in person with many SJSU iSchool faces, including Dr. Bernier and two members of his student assistant IMLS research team: Joy Rodriguez and Collin Rickman (pictured below with Bell and Dr. Bernier). 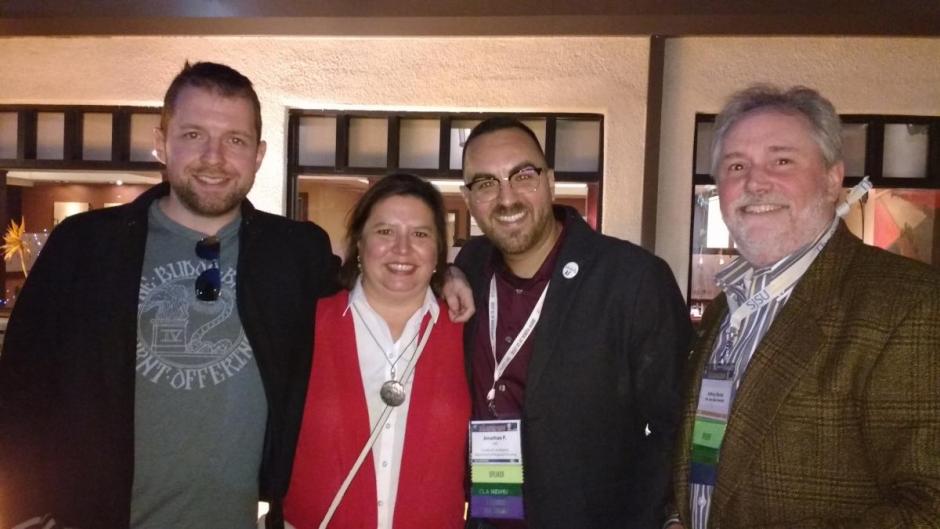 At CLA 2017, Bell also delivered the conference session entitled “Placemaking Through Partnerships in Florence-Firestone,” which examined a unique creative placemaking project in South Central Los Angeles. In fact, the project will soon produce a book, for which Bell served as a community navigator and author of a chapter on the neighborhood’s library history. “Notably,” says Bell, “my chapter evolved from my work in Dr. Debra Hansen’s course INFO 285 and my 2012 MLIS thesis proposal. This goes to show that our MLIS coursework can have a life after grad school.”

Early in his urban planning career, Bell found commonality in the work of public library and city planning departments. “Both agencies,” says Bell, “have a mission of community development at their core. I pursued my MLIS at SJSU in large part to explore ways to bring the city planning and public library worlds together to benefit the people.” Bell feels that he has bridged that divide through his MLIS coursework and, today, he continues to unite those worlds as an urban planner; as a researcher; as a writer.

For more on Jonathan P. Bell’s tireless work and philosophies, check out his ePortfolio here.