Cultural Intelligence can make a difference for your career and your organization. This webinar from the SJSU iSchool describes the details and impact of cultural intelligence.

Last fall, SJSU iSchool students got to test their “cultural intelligence” and redefine global culture with a career webinar entitled “How Cultural Intelligence (CQ) Makes a Difference. Are You Culturally Competent?” Presenter and educator Dr. Michele A. L. Villagran, certified Cultural Facilitator, boasts several degrees and certificates and is currently a lecturer at the School of Library and Information Science at the University of North Texas.

Do you wonder how cultural intelligence fits in with your MLIS degree? Look no further than the MLIS core competencies and Competency O—“Identify ways in which information professionals can contribute to the cultural, economic, educational, and social well-being of our global communities.” The School of Information is renewing its commitment to diversity through a webinar series focusing on global culture and diversity. This first webinar is a great way to gain an understanding of the nuances of cultural intelligence and its importance in the library and information science profession.

“Culture matters,” said Villagran, “when marketing or branding yourself, your library, your resources and your programs. It can ultimately make the difference between whether you thrive in an intercultural situation or you flounder.” No pressure, right? Villagran was quick to reassure her audience. “Anyone can improve their own cultural intelligence.” Cultural intelligence is more of a learned intelligence rather than an innate ability. She kindly went on to educate us throughout her talk, outlining the details of different cultural values, general differences in culture from nation to nation and how to detail and improve one’s own cultural intelligence. 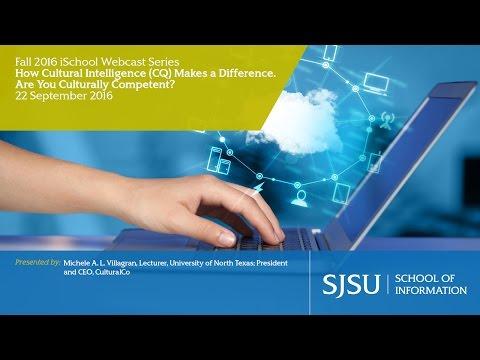 What Exactly is Cultural Intelligence?
Villagran used a definition of cultural intelligence, originally defined in 2003, but taken from an article by Soon Ang and Linn Van Dyne published in 2008:

Villagran went through the cultural intelligence test, a multi-dimensional construct developed to measure cultural intelligence and how an individual may deal with a wide variety of multi-cultural challenges and situations. The test included questions about how participants felt about their organization’s effectiveness in working across cultures and why the individual might feel that their organization had a high or low score. Recent change, Villagran noted, was almost always a reason for a lower score of effective cultural intelligence. She went on to address seven specific cultural value orientations, including:

After listing these cultural values, Villagran went on to explain each one in detail. For example, Villagram described Power Distance as the difference in which positions of power are expected and accepted. Low power distance means little formality, titles aren’t important. Low power individuals are more likely to challenge the system and buck authority. High power distance individuals prefer the chain of command and are less likely to challenge authority. These particular roles or values can be tricky to navigate, especially in an atmosphere of change or upheaval.

The cultural value of Context refers to direct or indirect communication. Sometimes people focus more on non-verbal cues rather than an upfront form of saying exactly what you mean. Many cultures expect to have to extrapolate meaning from a verbal exchange or read between the lines. Villagran cited this cultural value as the one that causes the most conflict and misunderstanding.

Cultural Knowledge and Successful Communication
The difference between success and failure in a globalized, multicultural world is the ability to adapt to a situation and have a rich understanding of culture and how it affects themselves and others. Cultural intelligence and knowledge of culture applies not just to individuals but also to leadership roles, multi-cultural business systems, interpersonal relationships and socio-linguistics (how ideas are translated through different culture and languages).

While listening to Villagran’s presentation, I understood what a major impact cultural intelligence has on group dynamics and interpersonal relationships. This holds true no matter what one’s work environment may be. We live in a global culture and it is time we all were educated as world citizens. The SJSU School of Information, with its core competency requirements, class assignments from instructors who hail from all over the world and webinars like this one from a qualified expert like Dr. Michele Villagran all work together to make iSchool students culturally intelligent.

For related posts on webinars and diversity, check out:
Enhance Your Coursework, Knowledge and Career Horizons with iSchool Webcasts

The iSchool’s Best Resources for Networking and Planning Your Career