iSchool faculty, students, LIS experts and professionals from across the world came together on June 7 to learn about and discuss future possibilities of blockchain technology. The second Library 2.018 mini-conference of the year, “Blockchain Applied,” was held online and for free. If you weren’t able to attend, catch up on some of the highlights below and then register for the Library 2.0 network to watch the recordings.

Opening Keynote
The opening keynote, “Blockchain Explained,” was presented by Jason Griffey, Fellow at the Berkman Klein Center for Internet & Society at Harvard University. He used the metaphor of a ledger as a starting point to describe the blockchain, stating “it’s the way that everything is put together [in a blockchain] that’s new for information exchange online.” Some of the features that make it unique and different from a ledger include being person-to-person, resistant to manipulation and having no central authority. Griffey thinks the most interesting aspect of a blockchain is that it can be highly decentralized, where data can be held by everyone and as a result there’s no central point of failure. Griffey concluded his presentation by saying that “we will get to a world where blockchain is an intrinsic piece of our digital information ecosystem.” 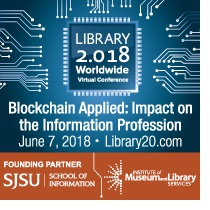 Now you actually know what blockchain technology is, you can jump into the roundtable discussion that featured four speakers. Todd A. Carpenter, Executive Director of National Information Standards Organization (NISO) kicked it off with a talk titled “What Might Standards for Library Blockchain Systems Look Like?” He outlined a few key standard elements including process management, state changes, provenance, authenticity and retention. Dan Blackaby, Head of Technologies Initiatives at Cornell University Law Library, explored some of the legal concerns around blockchain technology such as jurisdiction and autonomy. Next, Tonia San Nicolas-Rocca, Assistant Professor at the School of Information, discussed the topic of security in libraries. Finally, Michael Della Bitta, Director of Technology at the Digital Public Library of America delivered his presentation on “Using Blockchains to Authenticate and Preserve Public Discourse,” focused on social media and news archiving.

Presenter Sessions
After the opening keynote and roundtable discussion, attendees had the choice of several different sessions going on simultaneously. Since they were all recorded, you can check them out too. Simply browse the list of recordings and connect to one or two that look interesting to you, or watch them all!

All three panel members agreed that blockchain technology has the potential to transform and revolutionize our field and beyond. If you want to learn more, click here for a bonus resource and check out these upcoming events:

Also mark your calendar for the final Library 2.018 mini-conference, “Social Crisis Management in a 21st Century World,” on October 17 from 12 to 3 p.m. PDT. Look out for a book by Dr. Hirsh and Dr. Alman next spring, Blockchain: Library Futures Series, Book 3, published by ALA. In the meantime, you can also catch up on the Design Thinking conference from earlier in the year.