Library 2.017–The Future of Digital Literacy in Light of Fake Information 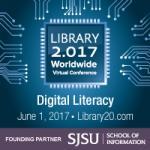 The closing keynote speaker for June’s Library 2.017 mini-conference “Digital Literacy + Fake News” was futurist Bryan Alexander. Alexander’s recent books, Gearing Up for Learning Beyond K-12 and The New Digital Storytelling, focus on the ways in which technology transforms education. With that focus in mind, Alexander discussed what fake news is doing to digital literacy and the importance of teachers, librarians and all educators to foster critical thinking in their communities.

After thanking the founding sponsors, Steve Hargadon and the SJSU School of Information and its director Dr. Sandy Hirsh, Alexander touched on a number of the day’s breakout sessions and the topics that were covered.  Then he went on to draw a common thread amongst all these great presentations—the need to organize information. “Libraries curate,” said Alexander, “but librarians should teach users to curate content as well.”

The idea of digital literacy and educating the general public on how to verify informational sources, identify facts and find relevant information is relatively new and never more important than right now. In the last year alone, we are rethinking the way political information is grounded—or not. “Digital literacy involves a mixture of technical, personal and social capacities.” More and more people are beginning to use social media to share information with each other and become an organized voice of dissent against the influx of false information and the shifting political tide. Where does this leave librarians? Are we still just the “keepers of the books?” And if we wish to redefine librarianship and make it known that we are experts and educators in digital literacy, how do we advertise ourselves as such to our communities?

The slide entitled “Where is this going?” echoed my own sentiments and had me scrambling to take careful notes that I hope will serve as a map and instruction manual for the future.

But whom is the “we” of which he was speaking? Alexander then went on to discuss environmental stress, political unrest, tottering leadership and distrust and friction, on an on ad nauseum. He stressed the importance for librarians and teachers not to distance themselves from the way information is shared through social media. “We have to rethink our curriculum accordingly.” I translated this quote as the need for librarians to regularly and assertively come out of their quiet institutions and communicate with their patrons. The sharing of information and imparting of information should be a consistent two-way street.

The next segment of Alexander’s presentation went on to discuss artificial intelligence and the way in which programs will do the sorting and curating for us. The future of information could lie in alternative metrics, or altametrics, that expand upon the simple citation of references in scientific papers and deliver a wider range of information and predicted success of the publication. The company Meta, recently acquired by the Chan Zuckerberg Initiative, could develop into a free resource of information beyond simple scientific journal citations. In this way, the social media mogul could develop a way for information to be connected and disseminated for library use.

Surprisingly, Alexander also mentioned the continued importance of radio and printed media, pointing out that 20th century methods of relaying information still persist in the second decade of the 21st century. The major theme of Alexander’s presentation, to which he always returned, was the need for information authorities like traditional newspapers and librarians to guide the general public through the oceans of information, fake and otherwise.

For the last 20 minutes of the presentation, Alexander answered questions from the audience. “Policy usual lags behind technology,” he said in part of his answer to one person’s question. As an example, he went on to describe the rapid pace of automated trading, so fast that human financial institutions couldn’t keep up. Too often, the technology makes its mark before policy makers even register it on their radar.

Alexander expanded on another question by asking of the audience, “What if a librarian were an informational entrepreneur?” Operating under this title, an information entrepreneur would work proactively, going out into the community to offer information to those who need it. Perhaps this is the way corporations use librarians, calling them information professionals in order to separate them from the traditional bookish institution employees.

Another participant’s question had to do with introducing high school students to concepts of digital literacy. Alexander suggested having a discussion about gaming with high school age kids, searching chat boards and YouTube videos about the games. Another activity he recommended was going on to the ever-popular research source for high school students—Wikipedia—and then taking the research a bit further to look at the talk windows and really see how much work goes into these pages.

“How do we put these ideas into practice?” asked another participant.

“Good question.” Alexander and I concur on this answer. “Librarians are now on the front lines of our future and may be our best hope for understanding and dealing with the enormous changes of today’s digital and political landscape.”

This final quote, which ended the formal part of the closing keynote presentation, can be left up to a wide interpretation of specific actions. I for one feel that it may be a call to make librarianship a more assertive and proactive institution. That makes me proud of my chosen profession.