Thoughts and Inspiration on Work and Life: A Chat with iSchool Director Sandy Hirsh 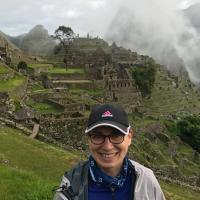 Well folks, it’s down to my penultimate post here at the SJSU School of Information’s iStudent Blog and I’ve been reflecting a lot about my six years at the iSchool and the last three as the lead writer for this blog. I wanted to share some of my thoughts and reflections with someone who gets it: iSchool Director Sandy Hirsh.

So much has changed since I started the program in 2011 – the core courses Info 200, Info 202 and Info 204 have been redesigned and updated and even the school’s name has changed. During my nearly six years in the iSchool MLIS program, I learned an amazing amount from not just the relevant and innovative curriculum and resources but from the incredible people who are a part of the SJSU School of Information.

I recently met Dr. Hirsh at the SJSU iSchool information booth in the exhibition hall at the ALA Conference in Chicago (pictured below left at the iSchool ALA reception in Chicago with Bill Fisher, Rhonda Dahlgren and Anthony Bernier). Since she was only able to talk for a few minutes there, I wanted to reconnect with her and be able to talk at length about what her job is like, how she balances work and play, and to glean tips on how to be such an influential leader in the field of library and information science as she most definitely continues to be. In a recent phone call, we shared our experiences of the last several years as well as our plans and hopes for the future. I am so excited to share some of these insights with you all! 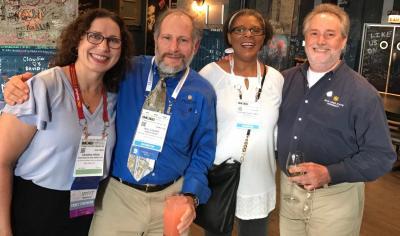 How to Become a Leader in the Information Profession: Get Involved!
The most important thing I learned in my time knowing Dr. Hirsh is what she preaches every time she addresses current students at student orientations and Director’s Forums and to prospective students while traveling and promoting the iSchool’s many programs: “Get involved!” This means more than just marching through coursework and getting a degree. “Do an internship,” said Hirsh in answer to my question regarding how a student, like myself, can add to their experience if they aren’t currently working in the library field. “You can do a traditional internship where you show up and work on site, but there are a lot of opportunities to work virtually with any number of organizations.”

A virtual internship was precisely what I chose to apply for, the flexible schedule and lack of a commute being ideal of my family responsibilities and remote location. I applied for an internship with EveryLibrary and ended up working for them doing some grant writing and campaign research. It was a fun experience and gained me valuable sources for recommendations, which I am in need of as I start applying for a new career. But that’s just the start. Hirsh recommends students and information professionals, “Join a professional association, too. Get involved and volunteer for a committee or other professional activity. While it may be difficult to travel to national conferences, there are state and local chapters you can join, too. Being part of a professional organization demonstrates leadership skills and helps you develop professional connections that will serve you well throughout your career.”

Since I don’t currently work in a library or information organization setting, I was eager to supplement my graduate school course work with something that would give me a step up when I started looking for a full-time job. I joined both the American Library Association (ALA) and my state chapter, the California Library Association (CLA), and thanks to some generous funding, gained the opportunity to travel to Chicago for the ALA Annual this last June and CLA the previous November. “Both internships and involvement in professional organizations enhance your resume and professional network,” Hirsh said, making me feel like—phew!—I had done the right thing. 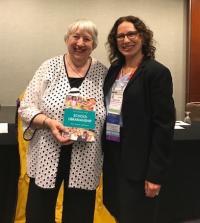 Hirsh Leads by Example
While we talked on the phone, Hirsh shared with me her favorite moments of ALA conference week. “It’s a very, very busy conference for me,” she said, mentioning just a few of her board commitments, including being Chair of the ALA Publishing Committee and a member of the advisory board for the Center for the Future of Libraries, as well as serving on ALA Council as the representative for the International Relations Roundtable. One of Hirsh’s biggest conference highlights was getting to be at the Beta Phi Mu reception where former iSchool Director and professor emerita Dr. Blanche Woolls (pictured here with Hirsh) was honored for her lifelong commitment to librarianship. SJSU iSchool lecturer Dr. Sue Alman recently edited a book School Librarianship: Past, Present, and Future, which was published in Woolls’ honor and which Hirsh had the honor to write the foreword.

“It was really special, getting to be a part of honoring Blanche and both of us being there to represent the iSchool—past and present directors.” During the conference, Hirsh was further invited to talk to Patty Wong’s Info 298 Professional Socialization and Leadership class and share a bit about her career and conference networking experiences. 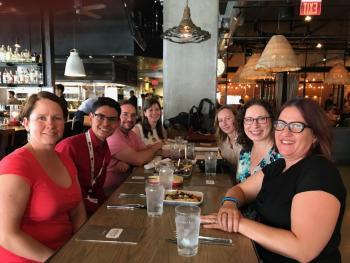 At the Special Libraries Association (SLA) conference in Phoenix earlier in June, Hirsh enjoyed lunch with iSchool and SLA student members and alumni—an event which has become a sort of tradition at the SLA conference. (Here at the lunch in Phoenix:  - Kate Spaulding, Will Sheppard, Jonathan Christiensen, Ame Maloney, Caroline Bautista, Yael Hod) “I always love the opportunity to engage with students and alumni,” said Hirsh, which become obvious to me while talking to her one-on-one.

A Fulfilling Life—Professionally and Personally
As you can tell, Hirsh is a respected leader in the field of library and information science and she is fully engaged in all that she does, professionally and in the rest of her life. Despite travelling all over the world and being an involved iSchool director on the San José State University campus, she still makes time for family and friends and more personal achievements. “Since the passing of my mom two years ago,” said Hirsh, reflecting, “I vowed to live each day to the fullest and to never take for granted my health or ability to do things.  So you can see that in actions in the past couple of years. I take full advantage of every opportunity – both professionally and personally – and try to live life to the fullest.” She shared with me some of her most recent adventures with family and friends. 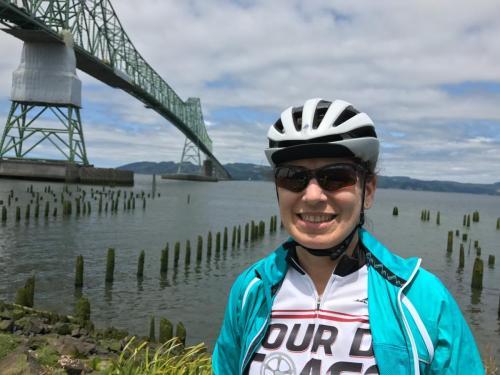 In a recent vacation, Hirsh biked down the Pacific coast. I knew from interviewing her for a Day in the Life post that she was an accomplished road biker, but a trek of this sort is quite impressive. “We rode more than 400 miles from the Peace Arch at the U.S./Canadian border all the way to Astoria, Oregon,” she told me. “We joined a friend for one of the legs of his mission to ride the entire U.S. Pacific Coast from the Canadian border to the Mexican border.” During the group’s journey through Washington, they stopped in Bellingham to spend time with the iSchool’s very own assistant professor Dr. Virginia Tucker! 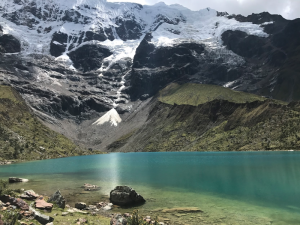 At the end of April, Hirsh flew to Cuzco, Peru to begin hiking for five days through the high Andes Mountains to Machu Picchu. “We hiked on the Salkantay Trail through extreme conditions where sometimes there was barely even a trail to follow,” she said. “It was so amazing though. At one point, we hiked over a 15,000-foot mountain pass. We stayed in these remote mountain lodges and at one, I could look and see a glacier right outside my window!” After the long hike, Hirsh and her group flew to Puerto Maldonado, located in the Peruvian Amazon basin. They travelled deep into the jungle – eight hours on a motorized dugout canoe on the Tambopata River — to the Tambopata National Reserve. She stayed in jungle lodges that didn’t have any walls or screens facing out to the jungle – just mosquito netting around the beds. She saw hundreds of animals and birds, including macaws and parrots, capybaras, monkeys, and peccaries. “I even saw a harpy eagle!” All this taking place the same year she completed her first half-marathon in January. I can only relate with having completed my e-Portfolio and surviving a long weekend car trip with three children. 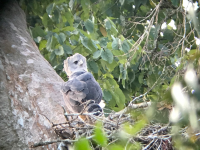 More Professional Travel on the Horizon
The fun and busy schedule doesn’t stop there for Hirsh, though. This summer she’ll be heading to Poland for the International Federation of Library Associations and Institutions (IFLA) conference. At this conference, she will be representing the School at the iSchool booth in the exhibit hall and also will be attending meetings as a standing committee member on the Continuing Professional Development and Workplace Learning Committee. Other conference travel for the fall includes the California Library Association (CLA) conference in Riverside, California in November as well as the Association for Information Science and Technology (ASIS&T) conference in Washington, D.C. At the CLA conference, she will host a reception for iSchool students and alumni and will represent the iSchool at the booth in the exhibit hall; she looks forward to seeing lots of alumni and students there. At the ASIS&T conference, she will be part of an internationally-represented panel presentation entitled “How International is Your LIS/IS program in the Global Higher Education Era?”

In October, Hirsh will also be travelling internationally again, this time to Japan where she will be an Invited Scholar for three weeks at Riykko University in Tokyo. While she’s there, she will give talks and guest lectures and discuss possibilities for collaborative research focusing on online learning. Here at home (though available for free all over the world), Hirsh is looking forward to October’s Library 2.017 mini-conference about MakerSpaces.

Living Life to the Fullest After Graduation
It was so fun to share iSchool experiences and also hear about all the travelling Hirsh has done this summer. I’m inspired to become more involved in the ALA though my first career move after graduation may not be to a traditional library setting. I think it’s important to keep building my resume and keep up with my professional contacts. Investing in my networking has already seen returns, as I’ve already had a preliminary interview. Like Hirsh, I also want to invest time and energy into my family. I am inspired every day by my children and they challenge me to become a better children’s services librarian. When I was in Chicago, the thing I missed most was reading to them before bedtime every night. I look forward to the nights I can read longer because I won’t have a term paper due later in the week.

It’s hard to put into words the tremendous life-changing experience that grad school has been for me. I have spent the last six years pushing my own limits and being endlessly inspired by the staff, faculty, alumni and fellow students at the iSchool. These people have given me what I need to be an inspiration and example to my daughters. From one person to the next, generation to generation and teacher to student, learning happens—again and again.