This week we welcome a guest post by Dr. Michele Villagran on the iStudent blog. She’s a member of the iSchool’s Diversity Committee and helped organize a webcast on transgender patrons and library services. The webcast was wildly popular and reached maximum enrollment. Dr. Villagran shares highlights of the webcast with us.

On March 25, 2019, the San José State University School of Information’s Diversity Committee hosted a webinar entitled, “Transgender Inclusion in Libraries” to continue our celebration of diversity and appreciation of inclusive excellence. The session received overwhelming interest from students, alumni, faculty and practitioners, and peers within the library and information science profession from across the United States.

Reed Garber-Pearson, Micah Kehrein, Sunny Kim and Bean Yogi were the four dynamic panelists for the session. As a condensed version of this workshop, the two main goals of the session were around learning about transgender, queer and gender non-conforming peoples’ experiences, and exploration of ideas for creating safe spaces through language, programs and policies.

Bean opened the session with a land acknowledgement of the area from which the presenters were broadcasting from, the homeland of the Duwamish tribe to recognize and appreciate the indigenous peoples. Our speakers each use the pronouns they/them/theirs, which are the words that are used to refer to someone in the third person. Other examples include she, he or ze.

Common language and terminology was discussed to ensure we were speaking to each other versus across each other. It was important to note that languages may change over time and that gender as a binary is false even though in society, gender is defined as binary (man/woman). The following definitions guided the discussion:

Micah shared with us the Gender Unicorn, which illustrates gender identity, expression, sex assigned at birth, physical attraction and emotional attraction. While the presenters do not love this graphic, it was created by transgender individuals as an educational resource and is helpful in illustrating the complexity of identities within each of the categories.

Bean expressed that there is no one size fits all trans or non-binary identity. Trust the pronouns that someone tells you – they are telling you who they are. Transgender people are intersectional and often include all races, all socioeconomic classes, all ages, etc. When thinking about transgender inclusion in libraries, we should consider having programs and services which are inclusive of all trans people as they are a part of our communities.

Micah further discussed why this is important for librarians. We work with all different customers and interact with trans folks. If a trans person is misgendered that could escalate into a challenging situation. Misgendering happens regularly to trans folks and it can often be harmful and hurtful. Learning to use gender inclusive language as discussed earlier is a first step to make our libraries more inclusive and welcoming. Assessing your institution is a way you can determine how your organization can do better. You may have transgender coworkers, and who may be continually misgendered, creating a hostile work environment. Transgender employees also face other barriers, such as with health insurance.

Reed offered best practices for how we can make safer spaces where trans folks can be more seen and acknowledged in our workplaces. First relates to misgendering and assuming gender. It is better to ask someone rather than assume. Once you are informed of their gender, use that gender and the correct pronouns. Words are very important as trans folks often experience daily disrespect. Another best practice is to not inquire about the particulars related to their bodies or surgeries as this is personal. Practice using the correct pronouns or correcting yourself and apologizing when a mistake occurs. Acknowledging and correcting are two important actions you can take. The presenters offered several dialogue scenarios to illustrate how to do this with your language used.

The last section of the session focused on policies and practices of inclusion within the library. There were many wonderful examples that Micah offered: 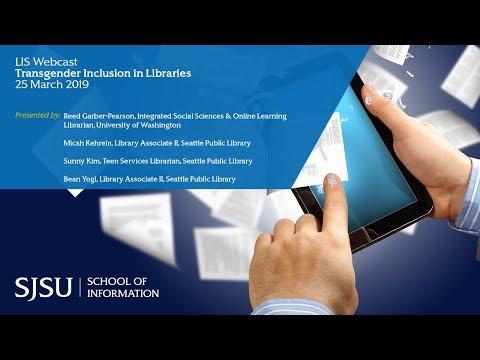