Around The Web: Blockchain and Trust

We have heard about data breaches plenty of times. A person might have been a victim of one, like the Target data breach, and it begins to make us wonder if there is a secure way to protect our information from being breached.

Dr. Pat Franks, recently posted a Blockchain powerpoint video called Blockchain Technology for Recordkeeping. For our studies, this is a very good video focuses on what blockchain is, the terms of blockchain technology, and applications for recordkeeping. One of the first things that stuck out to me during the video was her quote on the first slide “It’s all about Trust.” Which when it comes to learning about Blockchain and the technology, trust is everything but it is also an elusive concept. 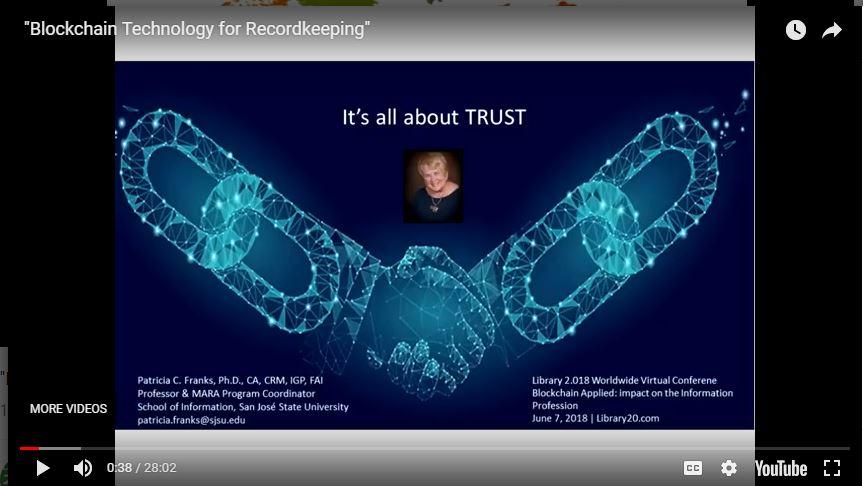 From Rachel Botsman’s TedTalk in 2016, she asked how many people have been a guest or a host of an Airbnb? How many have invested in Bitcoin? How many have met a match on Tinder? And she points out how these examples of technology are creating mechanisms that is enabling us to trust unknown people, companies, and ideas, as well as institutions such as banks, governments, and even churches. But in its humane essence, trust can be defined as “a confident relationship to the unknown.”

Can we trust Blockchain? What is it exactly? Why is it such a buzzword lately? There are many definitions of Blockchain, one of my favorites was an explanation by Don Tapscott that John Oliver had talked about on his show. This quick clip (with its few foul words) is probably the simplest explanation and quite hilarious definition as well. Economists explain Blockchain as “the great chain of being sure about things” (Botsman, 2016). Or as Franks had posted in her video, the definition can be “The Blockchain is an incorruptible digital ledger of economic transactions that can be programmed to record not just financial transactions but virtually everything of value.” Don and Alex Tapscott.

Blockchain technology creates a decentralized, digital ledger of transactions, it encrypts transactions, then distributes them throughout a network that creates a public record that is virtually impossible to  hack (Sullivan, 2017). But trusting this is a major leap, a trust leap, as Botsman says. We take a leap everyday when we order something off the internet, putting our credit card information in the site for the first time. However, Blockchain is trying to improve the trust in industries where the information is transferred.