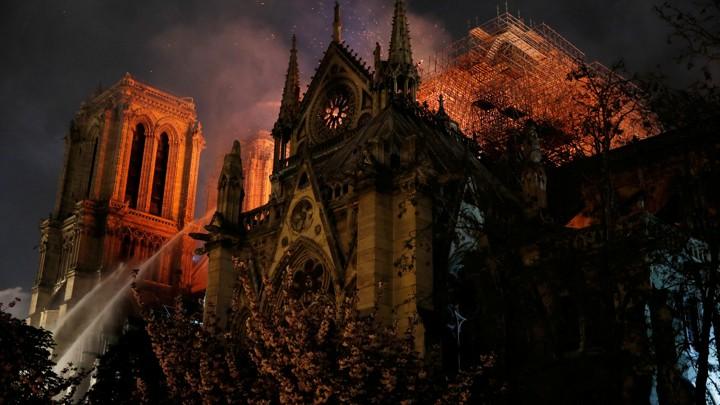 However, these two relics were locked inside a safe in the church’s treasury that only a few knew how to open and the fire brigade wasn’t able to reach them.

Finally, as the flames high above crept closer to Notre Dame’s famous spire, a church officer appeared with the crypt key, and the chaplain and firefighters rushed in. As luck would have it, several people with deep knowledge of the contents of the church were already on site when Monday’s fire broke out. Notre Dame was undergoing a planned restoration, and Didier Durand was working on repairing the cathedral’s flying buttresses when the first alarm went off.

As the flames ate their way through the cathedral’s roof, Durand toiled through the night with other specialists to evacuate artifacts and statues. There were 20 of onsite workers who packed all these artworks, protecting them, making an inventory.

Marie-Helene Didier, a conservator who has been overseeing the restoration, was also there, noting down a precise account of all the works before packing them into trucks to preserve them as much as possible.

Among the items salvaged was the tunic of St. Louis, believed to have been worn by King Louis IX in the 13th century, and ornaments from the altar used for the coronation of Napoleon in 1804, among many other invaluable artworks and relics.

This also presents an opportunity. President Emmanuel Macron suggested that this is an opportunity to train a whole new generation of French craftspeople and hold a competition that might inspire a contemporary take on one of Paris’ most beloved and oldest landmarks. Even if a new generation of French craftspeople did not want to put a new spin on the cathedral, they could use laser prints that Andrew Tallon had to recreate the iconic symbol.

Andrew Tallon was an architectural historian who study medieval architecture and took a Leica ScanStation C10 to Notre-Dame to painstakingly scan every piece of the structure, inside and out. They mounted the Leica on a tripod, put up markers throughout the space, and set the machine to work. Over five days, they positioned the scanner again and again—50 times in all—to create an unmatched record of the reality of one of the world’s most awe-inspiring buildings, represented as a series of points in space. Tallon also took high-resolution panoramic photos to map onto the three-dimensional forms that the laser scanner could create.

Tallon laser data consist of 1 billion data points, structured as “point clouds,” which software can render into images of the three-dimensional space. Stitch them together, inside and out, map the photographs onto the precise 3-D models, and you have a full digital re-creation of incredible detail and resolution.

Laser scans like Tallon’s represent a significant development in the restoration of historic buildings. “Having the scans is incredibly important in any kind of reconstruction,” said Raymond Pepi, the president of Building Conservation Associates, which was the restoration consultant for St. Patrick’s Cathedral in New York City.

These are some great options for restoring Notre-Dame and let’s hope that while this is a sad moment, hopefully, there are new opportunities to either recreate Notre-Dame or create something new and something just as iconic.