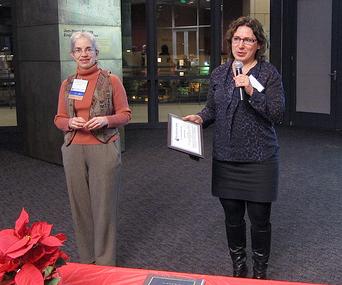 Hirsh was honored for two articles: “Preparing Future Professionals through Broad Competency Planning,” published in the SLA’s magazine “Information Outlook” in January 2012; and “The Reality of Fantasy: Uncovering Information-Seeking Behaviors and Needs in Online Fantasy Sports,” co-authored with SJSU SLIS alumnus Matthew Caselli Jr. and Christine Anderson of Sportsvision Inc., and published as an Extended Abstract at the Association of Computer Machinery CHI 2012 conference.

“The range of Dr. Hirsh’s interests and contributions to the field during her distinguished career continues to inspire new graduates and seasoned professionals alike,” Gust said.

The Published Member Award recognizes an SLA Silicon Valley Chapter member who has contributed to the field by authoring one or more papers that appeared in professional publications during the year on topics related to libraries, librarianship, and related technologies. Previous recipients include Praveena Raman in 2010, and SJSU SLIS lecturer Jean Bedord in 2009.

The award was presented to Hirsh at the chapter’s annual meeting held December 6, 2012.

“The SLA Silicon Valley Chapter is proud to have Dr. Sandra Hirsh as a member, and to honor her with the Published Member Award for 2012,” Gust said.