Melissa Taylor, a recent graduate of the Master of Library and Information Science program at the San José State University School of Information, took a class in library marketing during her final semester and used a course assignment to market herself into a new job. 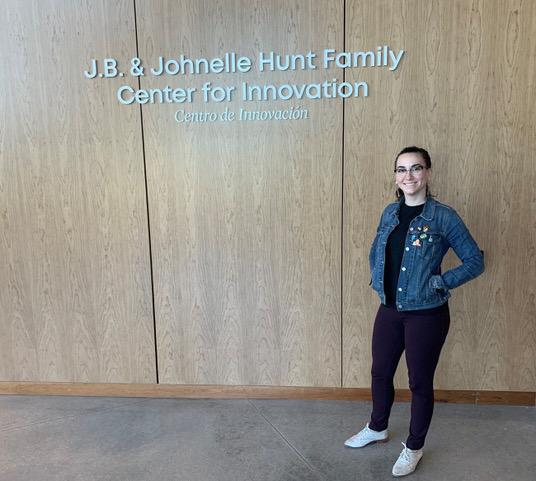 The Fayetteville library’s new Hunt Center for Innovation is part of an expansion that nearly doubles the library’s size. In addition to the Hunt Center for Innovation, the expansion includes a 700-seat multipurpose room, a teaching kitchen, an expanded youth services area, and an art and movement room. The expansion was described as “a wonderland of playing, learning and curiosity” in an article published by the Fayetteville Chamber of Commerce.

Although the Hunt Center for Innovation doesn’t open until June 2021, Taylor, who started her new position this past January, is busy finalizing space plans, working out policies and use guidelines, building partnerships with the local community, and purchasing some last pieces of equipment. The Hunt Center for Innovation includes a professional-grade recording studio, a simulation lab with a FAA-approved flight simulator and heavy equipment simulators, as well as a robotics lab and virtual reality studio.

“We have a surprisingly robust community of pilots and flight schools,” Taylor says, explaining the simulation lab. Even before the center’s official opening, Taylor has partnered with a local flight school to allow its students to log hours on the flight simulator on days bad weather keeps the aspiring fliers grounded. For Taylor, the center’s unusual feature is just another form of information access, one that allows community members to try new skills like flying without the high cost. “We’re really excited about the potential for workforce development with the simulation lab,” she says.

Local businesses contributed to the simulation lab. Crosslands Construction, which not only built but also supported the library expansion, advised on some of the heavy equipment simulators. The Hunt Center for Innovation is named after the Hunt family, founders of the J.B. Hunt Trucking Company, whose $5 million donation also funded a big rig truck simulator.

“We’re hoping people can leave the library and go right into a short apprenticeship that will result in a certification process,” Taylor says, describing the plans for the truck simulator and the Caterpillar excavator simulator, which can be configured to simulate other kinds of heavy equipment. “We’re trying to create a pipeline for certification that is something that has been highly sought after in our community.” Taylor is currently building partnerships with the Northwest Technical Institute and the University of Arkansas’s School of Engineering.

The job managing this unique maker space is a perfect fit for Taylor. “I’d been looking to kind of veer into the more technical side of library services, more maker-spaces, robotics,” she says. “When I saw this opportunity, it was exactly what I had been looking for, so I jumped on it.”

Taylor arrived well prepared for her new position. She is a public library veteran, having started as a page during high school in Florida. Although she’d originally planned a career in secondary education, a stint teaching changed her mind. “I thought back on my time in the library, I never dreaded going to work,” Taylor recalls. She switched her undergraduate major at the University of Colorado, Colorado Springs to Geography and Environmental Studies, and returned to work at the public library.

Taylor continued to work when she returned to school for her MLIS degree. Most recently she was an outreach librarian in the teen services department of the Jefferson County Public Library, where she gained valuable experience both in technology and building community partnerships. “I taught coding camps; I taught robotics camps; and being in outreach, I worked a lot in the community with some really amazing community maker spaces,” she says.

Throughout her iSchool studies she mixed courses on public librarianship with courses on technology tools and emerging technologies. “Any information tech tool classes I highly recommend,” says Taylor, using as one example, INFO 246 Information Technology Tools and Applications – Advanced, where she learned SQL. “I never thought I’d be using SQL, but we totally use SQL databases here.” Taylor notes that she picked the iSchool for its extensive course work options, as well as for its flexibility and price. Also, “I had tons of friends in the library world who’d gone through the program and had absolutely amazing things to say about it.”

Experience and schooling combined to win Taylor her dream job before she’d finished her final semester—with a little help from that iSchool assignment in self-promotion. “My supervisor tells me all the time that my resume was really impressive,” Taylor laughs. “This was one of the most streamlined hiring processes I’ve ever been through.”