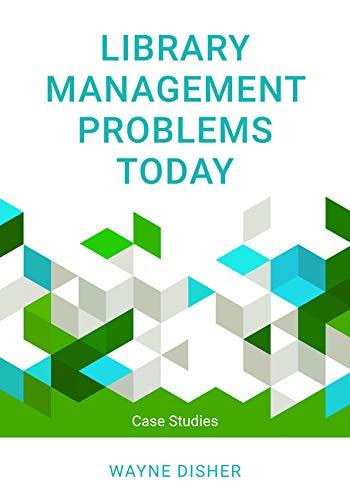 Textbook and scholarly publisher Rowman and Littlefield will release Wayne Disher’s new book, Library Management Problems Today: Case Studies in March, 2021. Disher, an instructor at the San José State University School of Information, has edited a library management textbook that is unique in using fictionalized versions of real scenarios that have taken place at the library, in order to explore contemporary library management issues. For each of the 20 case studies, three library professionals analyze the situation described, resulting in a wealth of perspectives.

The idea for the book came from a past column in Library Journal called “How Do You Manage?” which inspired Disher to use similar case studies in the classes he teaches in the fully online Master of Library and Information Science program. “I thought, those are useful to me, I think they’ll be useful to students, as well.”

Students in both INFO 204 Library Professions and INFO 266 Collection Management respond positively to the case scenarios, Disher said. Not only do students enjoy them, the real world situations also spark lengthy discussions and student engagement. One scenario that always provokes a big response in Disher’s INFO 204 class is the case of the librarian who, inspired by another library’s programming, decides to implement a drag queen story hour in her conservative community with disastrous results. Disher has watched students change their mind about the fictionalized librarian’s actions in the course of discussion.

“It’s funny to see people in that particular scenario turn around from ‘that director was absolutely wrong,’ to ‘well maybe there was benefit to it and she went about implementing it wrong,’” Disher observed. He noted that most students are inductive reasoners, using observation to make decisions. “These scenarios are great ways for them to improve their library managerial skills, as well as their judgement and problem solving, specifically in libraries.”

Disher initially resisted putting the book together himself. He suggested the idea to Rowman and and Littlefield but urged them to find someone else to write it. The publishers and an iSchool colleague convinced Disher he should do it.

Disher drew upon an abundance of library experience to write the 20 case studies. He holds an MLIS degree from San José State University and worked as a senior librarian at the San José Public Library for more than 20 years. He was library director for the city of Hemet and also served as president of the California Library Association from 2011-13. Additionally, Disher is in demand as a library trainer and professional development speaker. Previously, he published A Crash Course in Public Library Administration (2010) and A Crash Course in Collection Development (2014).

After writing the case studies, Disher used professional associations and their social networks to recruit 60 library directors and other managers from a wide variety of libraries, big and small, rural and urban, primarily public but some academic libraries, to analyze and respond to the real-world problems. Contributors include Patty Wong, incoming American Library Association president and iSchool instructor, and Susan Hildreth, who served as the director of the Institute of Museum and Library Services under the Obama administration. He completed the editing and turned in the book last October.

The pandemic made convincing library professionals to contribute to the book even more difficult, as librarians focused their energies on responding to the challenge of providing services in the face of the shutdown. “I am in debt to those people who saw the value in helping the students of tomorrow,” said Disher.

The value of using case studies is multifold. Disher has observed that increased engagement in discussions results in students becoming more comfortable expressing their opinions and discussing controversial topics, which leads to stronger teamwork on group projects. Because of the work done in discussion posts, “People are more willing to work together and to bring up controversial ideas as opposed to not wanting to rock the boat,” Disher said.

The scenarios also help students with no library experience become more familiar with the profession’s terminology, activities and roles. Discussing the controversial topics also lends to job preparation. One student told Disher that she’d used a censorship-related case study from the class to respond to a question about censorship during a job interview. She got the job, Disher confirmed. “I don’t know if it was because of that, but she was able to articulate the issues a little bit more.”

Described by Rowman and Littlefield as “the first comprehensive case studies in library management book to be published since 1981,” Library Management Problems Today: Case Studies is currently available for pre-order.