One of two recipients of the 2021 Dr. Arnulfo D. Trejo Librarian of the Year Award, bestowed annually by REFORMA, is Dr. Michele Villagran, an assistant professor at the San José State University School of Information.

“The iSchool is so proud of and impressed with Dr. Villigran’s REFORMA’s Librarian of the Year Award,” commented iSchool Director Anthony Chow. “She is a true asset to the field and the iSchool, and we are so delighted that she continues to lead and flourish.” 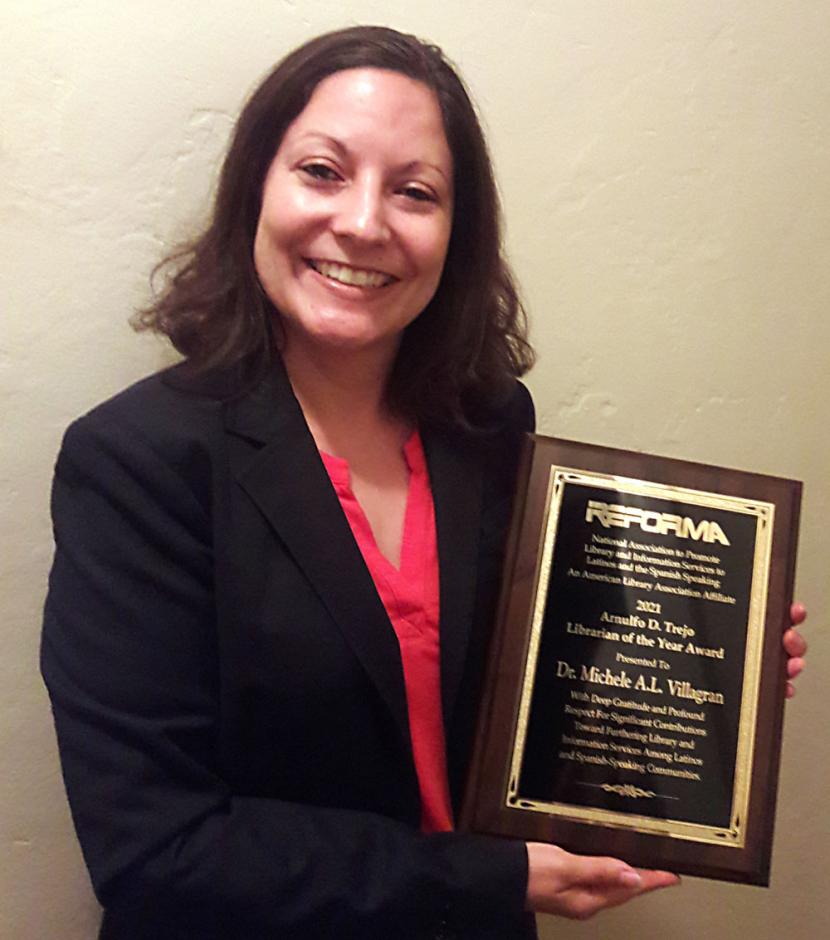 The prestigious award recognizes “a librarian who has distinguished himself or herself in the field of librarianship, promoted and advocated services to the Spanish-speaking and Latino communities, and made outstanding contributions to REFORMA,” according to the REFORMA website. The REFORMA awards were celebrated with a virtual gala on November 6, 2021.

In her speech for the occasion, Villagran said she was “humbled and honored” to receive the Librarian of the Year award. “I feel privileged to be joining an elite group of prior award winners.”

The award is named after REFORMA’s founder, Dr. Arnulfo Duenes Trejo, who died in 2002. Trejo was a librarian, educator and author who urged American libraries to develop Hispanic literature collections. With a group of like-minded librarians, he founded REFORMA in 1971, serving as the organization’s first president.

“I wish I had known and met Dr. Trejo,” says Villagran. “He was such a force in the profession and a true inspiration.”

Villagran joined REFORMA while still in library school at the urging of past Librarian of the Year winner Salvador Avila. She has served REFORMA energetically over the years, chairing several committees on both the local and national levels. Most recently, she reinvigorated REFORMA National’s education committee as its chair, and this year transitions to chair the newly formed research committee, while continuing to serve as co-chair of the Los Angeles chapter’s outreach and membership committee. She also serves as a mentor for the Los Angeles chapter.

Outgoing REFORMA President Oscar Baeza wrote this past July, “Kudos to Dr. Villagran for her work on education and ensuring that our future library professionals enter their careers better prepared.”

“I really loved the collegiality of members and the mission of the association,” says Villagran of REFORMA, adding that she’s motivated by “the importance and need to find ways that LIS programs can educate and prepare students and alumni for serving Latinx and Spanish-speaking communities.”

Villagran helped develop the iSchool’s REFORMA Student and Alumni Group—only the second such student group in the United States—and serves as the group’s faculty advisor. She has served as the iSchool faculty liaison to REFORMA since 2018, the year she began with the iSchool.

On the same day she was honored with the Librarian of the Year award, Villagran moderated a panel of past and present leaders from the iSchool’s REFORMA Student and Alumni Group, discussing the experience of creating a student group during a global pandemic.

“My personal and professional work, my service and my research, revolve around serving and uplifting underrepresented groups,” said Villagran in her acceptance speech, “ensuring diverse voices are heard, and continuing to assist students and professionals from these populations, including Latinx and Spanish-speaking, to strive towards success.”

Villagran’s research focuses on diversity and social justice in the LIS field and cultural intelligence phenomena within libraries. She holds an impressive number of degrees and credentials: after earning her undergraduate degree in International Business and Management at the University of Nevada, Las Vegas, Villagran went on to complete an MLS in Legal Informatics and an MBA in Strategic Management, both from the University of North Texas; and a Master’s in Dispute Resolution and PhD in Organizational Leadership, both from Pepperdine University.

Her doctoral thesis focused on cultural intelligence, a topic Villagran consults on as CEO of CulturalCo, LLC. She is frequently sought after as an expert in areas of cultural competency, diversity and inclusion, conflict resolution and emotional intelligence.

At the iSchool, Villagran teaches INFO 200 Information Communities and an INFO 281 Seminar on Cultural Competence for Information Professionals in the Master of Library and Information Science degree program, as well as writing and researching on topics that range from her specialties, cultural competency and emotional intelligence, to the legal response to COVID-19 in Latin America and the Caribbean.