The School of Information at San José State University celebrated Hispanic Heritage month in October by gathering a stellar mix of iSchool students, professors and notable guests for a series of enthusiastic discussions across two online events, both exploring how libraries can better serve their Hispanic/Latinx communities.

Recordings of the virtual symposium, “Making Vital Connections: Understanding and Serving the Hispanic/Latinx Community” on October 15 and the webinar that followed October 29, “Collaborating for Success: A Hispanic Heritage Month Case Study,” are both available online.

“We have a leadership role and responsibility, especially in the LIS area, to dedicate resources through staff, time and honorariums to bring to the table national leaders and representatives that can speak to EDI issues that will also be recorded, preserved, and always be accessible to the field,” said Dr. Anthony Chow, iSchool director.

Following introductory remarks by Chow and Rebmann, the symposium opened with a keynote address by Dr. José Aguiñaga, a full-time academic librarian with Glendale Community College in Arizona, active in the Association of College and Research Libraries and familiar to iSchool students who have taken his INFO 210 Reference and Information Services course offered in the Master of Library and Information Science fully online degree program. 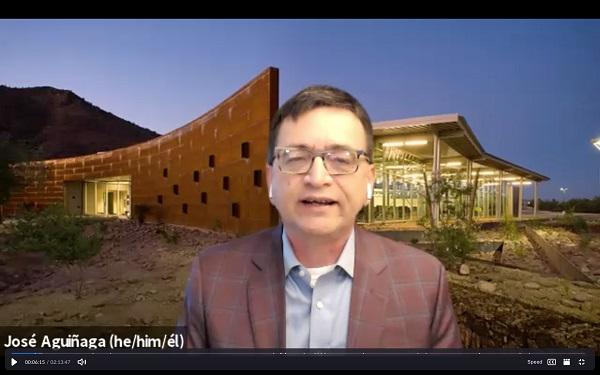 Aguiñaga set the tone of the symposium in his keynote, speaking movingly of the challenges he experienced while pursuing higher education, and the importance of support from family—both blood relatives and the many mentors who advised and helped him on his educational journey. One of those mentors was Arnulfo Trejo, founder of REFORMA, and the importance of this organization and others like it was a recurring motif. Villagran serves as faculty advisor for the iSchool’s REFORMA Student and Alumni Group and many of the panelists cited its impact on the LIS field.

Aguiñaga sounded another key theme of the symposium when he identified himself as “Hispanic, Latino, Chicano and a little Basque,” emphasizing the diversity of identities within the Latinx community.

The keynote was followed by two panel discussions that ranged over issues large and small: from power dynamics within the LIS field to the nitty-gritty details of building diverse collections.

Villagran opened the discussion with “terminology 101,” defining and contextualizing the terms Hispanic and Latinx, while Macias, an author, librarian, teacher and consultant known for his anti-racist work, noted the importance of acknowledging Indigenous and other intersectional identities. Gómez, a consultant for libraries and nonprofits with a background in both public and academic libraries, spoke of the need for more involvement by Latinx professionals at higher levels of library and government administration, saying, “policy is really where the rubber hits the road.” Panelists agreed that collections and the lack of Spanish language books are still a big issue. When Gómez remembered getting a grant to do a report card on public libraries and suggested it was time for another one, Villagran responded, “That is in progress!”

Striking a more somber tone, Macias spoke about the pushback some Latinx professionals have experienced, and how some feel they’re being used as public relations tools. “Racism isn’t about ignorance, it’s about power,” he said, adding that often real change begins with pressure from outside an organization. 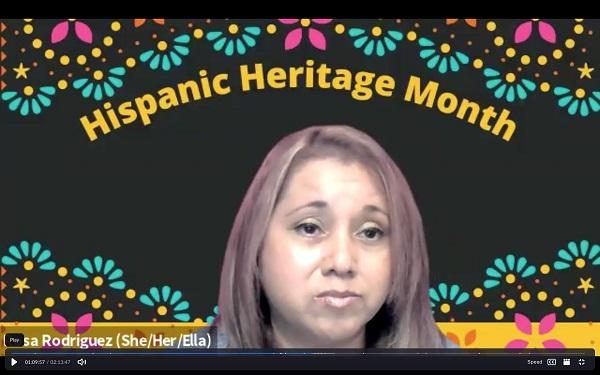 The discussion then turned to the experiences of on-the-ground librarians serving Hispanic/Latinx communities. Rodriguez, who is pursuing her MLIS at the iSchool while working as an outreach coordinator for the library at California State University, San Marcos, shared the “Best Practices” infographic she’d created, and spoke of her experiences doing mobile outreach. “We went to three different locations,” she said, and “although all the locations were Spanish-speaking, their needs were different.” She underlined again the diversity within Hispanic/Latinx communities and the importance of library professionals spending the time necessary to get to know their particular community.

The second panel deepened the discussion with its focus on best practices in a variety of environments, with each of the four panelists sharing their projects. Dr. Kathryn Blackmer Reyes, the director of the Africana Asian American Chicano and Native American Studies Center at King Library, recounted how the center was born as a result of student demand, saying that such spaces are “never created just because people want to give it to you. They’re created because of struggle.” She briefly highlighted some of her many activities, including “Before Silicon Valley,” an oral history project, and other efforts to document San José’s Hispanic/Latinx history.

A trio of iSchool students showcased both their EDI involvement and their impressive extracurricular contributions to the field. Linda Dami combines her MLIS studies with work as a clerk at the San Diego Public Library where she serves on the library’s EDI committee. She echoed Aguiñaga when she reminded listeners in her presentation that “Spanish speakers are not a monolith.”

Dami spoke on collection development, emphasizing the importance of assessment, and suggesting non-traditional ways to identify collection needs, using as an example her method of querying Spanish-speaking staff at the SDPL, including workers in custodial and security departments, about what kinds of books were needed.

Jillian Mariano, who identifies as Filipina, described her involvement in a project to document the solidarity of Filipinx and Latinx farm workers during the 1965 grape strike, again underlining the intersectionality of EDI activism.

Lastly, Monica Roman who works at the Whittier Public Library while pursuing her MLIS degree described her workplace’s bilingual Dial-a-Story/Telecuento initiative, echoing earlier discussions of the impact of COVID-19 on in-person programming and how lack of technology can affect Hispanic/Latinx access to virtual programming. “More than likely they have a phone,” said Roman, pointing out potential advantages of the program.

The themes of programming and services for Hispanic/Latinx communities were taken up again in the October 29 webinar “Collaborating for Success: A Hispanic Heritage Month Case Study.” Part of the iSchool’s Diversity Webinar Series, the webinar featured two staffers from the Denver Public Library discussing their challenges and successes in expanding programming for the DPL’s Hispanic/Latinx communities.

Nadia Rendon, Spanish services coordinator at Denver Public Library and her supervisor Nicanor Diaz, immigrant services manager and neighborhood service manager described a wealth of initiatives, describing how they used Argentinian empanadas, Chilean music and Lotería for seniors to engage different segments of the community. One of their biggest successes was introducing bilingual library cards during Hispanic Heritage month. “They were super, super popular,” said Diaz.

Diaz noted that these programming successes were driven by the response to an insensitive post that had been put out by the library’s marketing team without consulting other staff. “It was a learning experience,” he said, describing how it led to the formation of a task force made up of staff from all parts of the library, who brainstormed many of the successful programming ideas. “The hardest thing is to convince your administration to take a calculated risk,” said Diaz. “The library director should trust their staff. If Nadia comes to me and says, ‘I need money to do this program,’ I’m not going to question her. I’ve hired her to do this job and I trust that she knows what is needed.”

Both the symposium and webinar were brimming with insights, observations, and ideas that, “hopefully people can capture and adapt to their own communities,” as Villagran suggested at the conclusion of the webinar. With both program recordings and a full list of diversity related webinars dating back to 2016, the iSchool is providing DEI resources to the broader LIS community.