The 6th Annual VCARA Conference was held on April 21, 2015. It was well attended, which is not surprising considering the lineup of speakers. 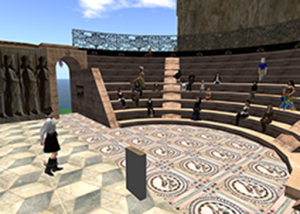 The first speaker was JJ Drinkwater of Caledon. This very interesting talk was about creating a community based on an historical time frame using technology that didn’t exist during the time the community basically lives in. Steampunk was used as an example–how it is really a fantasy, but because the community is built around it, it is real for the people experiencing it. 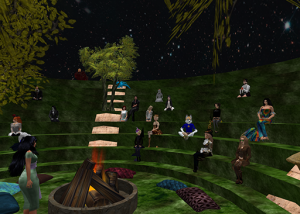 The second keynote speaker was Caledonia Skytower. As the owner and director of Seanchai libraries, Caledonia teaches through Storytelling. She described her projects at the library, which has a presence on Second Life, InWorldz, and Kitely. She used some amazing props during her talk and the highlight was an actual story where she transformed the amphitheater into a storytelling circle complete with a roaring campfire and starry sky. 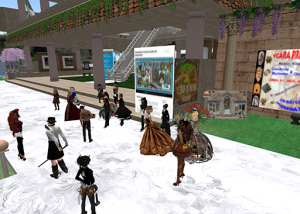 After the kenotes, there were nine different ten-minute presentations. It began with Sere Timeless about Rooca Sorrentina and the balloon exhibit. Then we heard about building a business in Second Life by jsweatt, a Minecraft club from Valibrarian, the importance of our avatars from Snow Scarmon, and virtual museums,archives, and libraries by Jane Awesome. 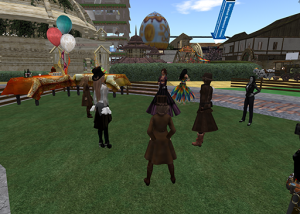 The next few talks included Amvans Lapis with a recap on the VWBPE conference, Jen Christensen on PTSD, Amza Hydraconis on Renaissance Island, and Cali Libby on her project with the YA Space. Once the last talk was finished, everyone went over to the YA space to take a look around. A Steampunk Party at the end of the evening was well attended.

In general, the conference was very successful. There were many people attending who stayed until the very end, and the atmosphere was friendly and fun. The presentations will remain around the plaza for the duration of the summer for anyone who missed the live event. A clickable rock containing the audio of the presentation sits next to each slide object. Steampunk rides (including a rocket ride and carousel) as well as an arcade will also remain up on VCARA for added fun until August. Don’t miss the temporary Aeronaut’s exhibit created by Sere Timeless!

Finally, stay tuned to this blog for announcements on the machinima created from video taken during the conference.