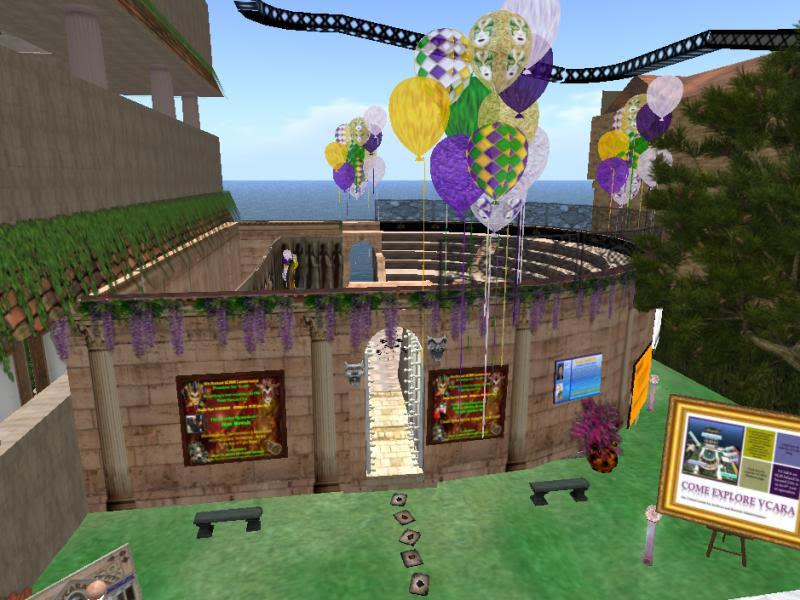 On April 18, 2018, VCARA held its 9th Annual VCARA Conference on iSchool Island in Second Life. This year’s theme was Passion for Truth: Trusting Information in the Fake News Era. Attendees posted to social media during the conference using #VCARA. 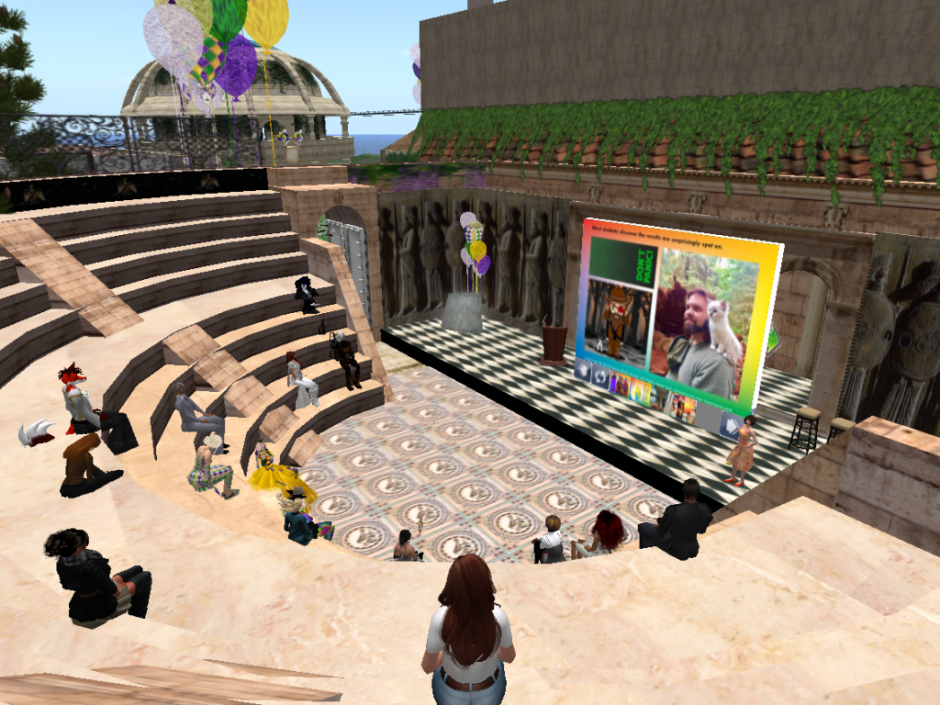 To celebrate our passion for seeking and sharing the elusive trickster that is truth (and exposing the cunning guises of those who spread false “truths”), participants were encouraged to don harlequin-inspired masks and costumes.
The conference kicked off with a brief background of VCARA presented by Dr. Pat Franks, who also served as Master of Ceremonies.

VCARA member Alyse Dunavant-Jones (MLIS 2018) announced the conference’s first simulcast in Zoom (the iSchool’s conference platform), which allowed users to participate in the VCARA conference regardless of their ability to use Second Life.

Alyse also encouraged participants to visit VCARA’s SCREAM Quest: Archival Nightmare in Colonial Boston, a self-guided tour on iSchool Island in Second Life. The Quest is open for all adventurers! 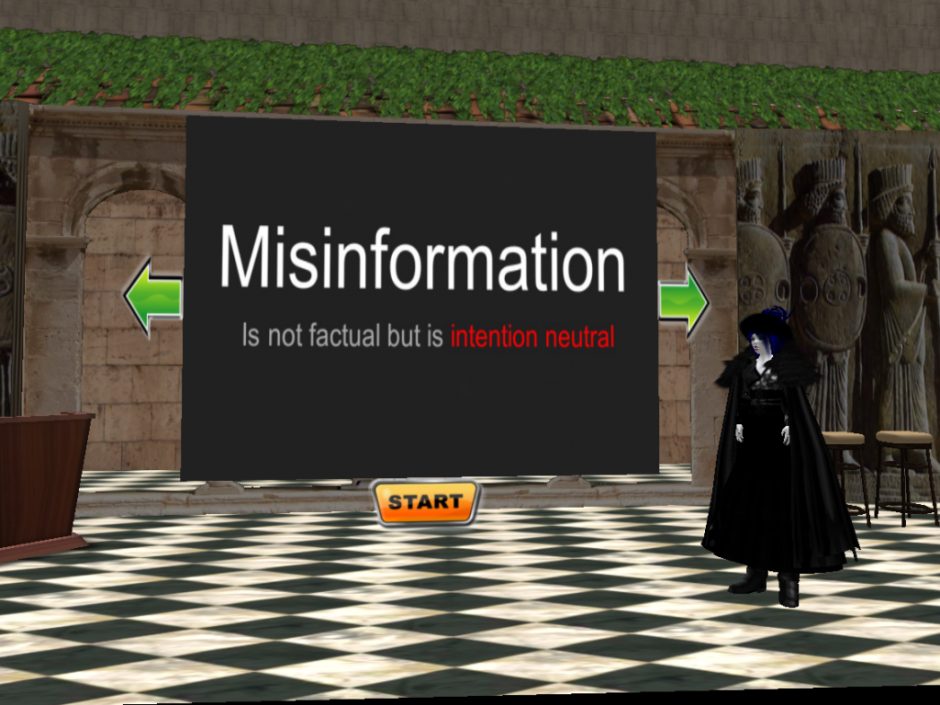 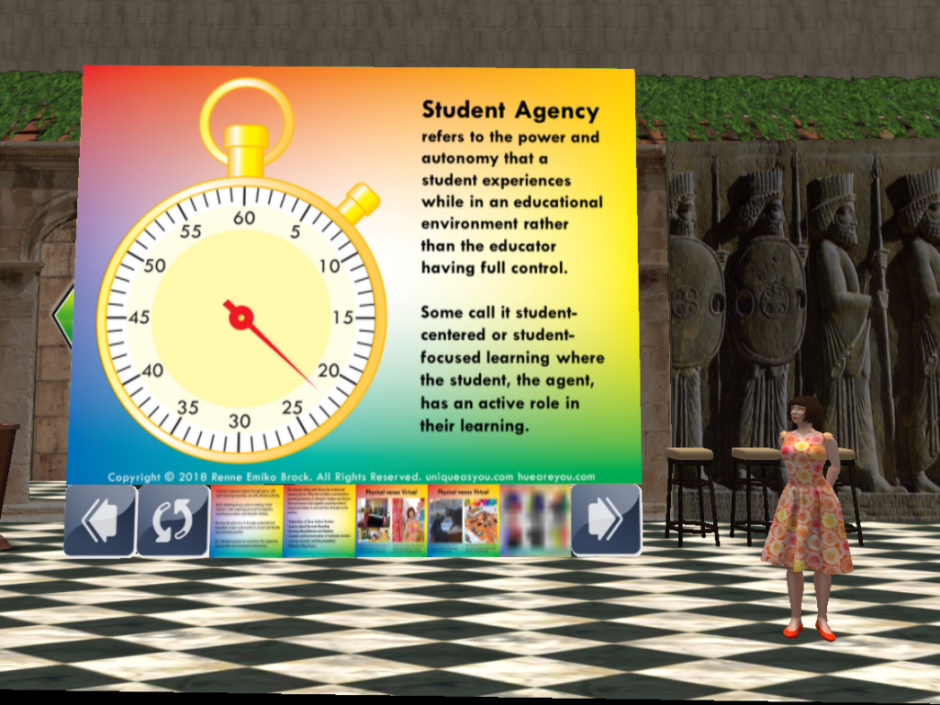 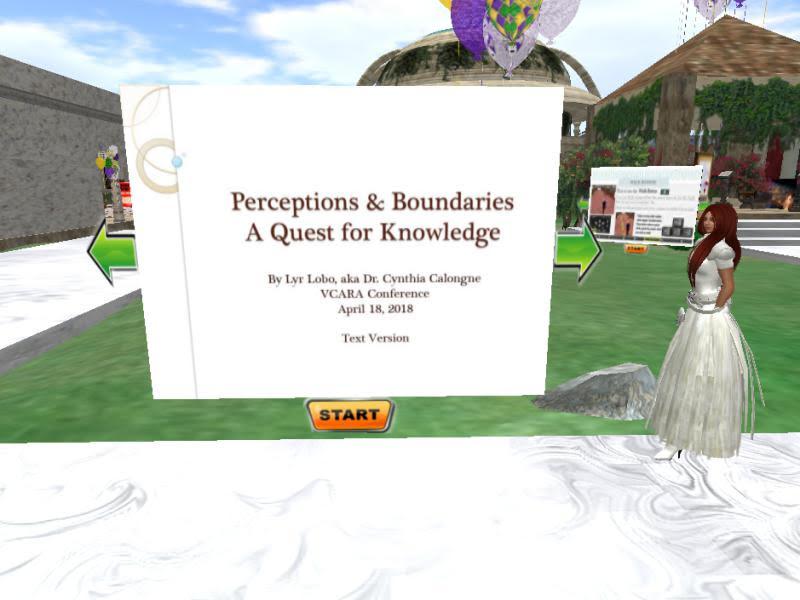 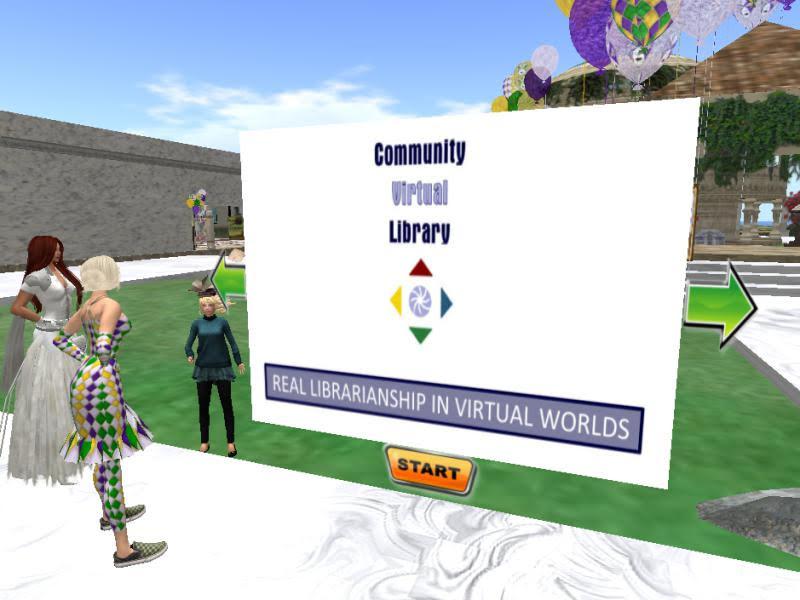 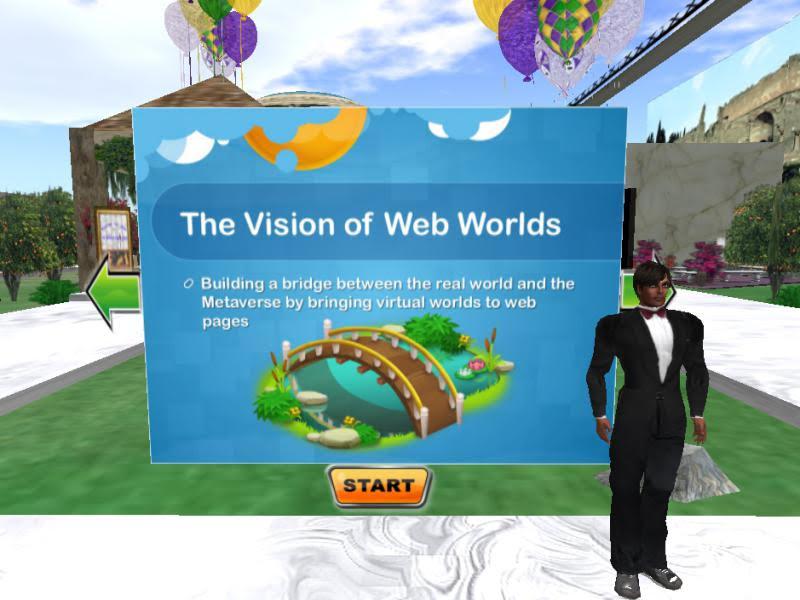 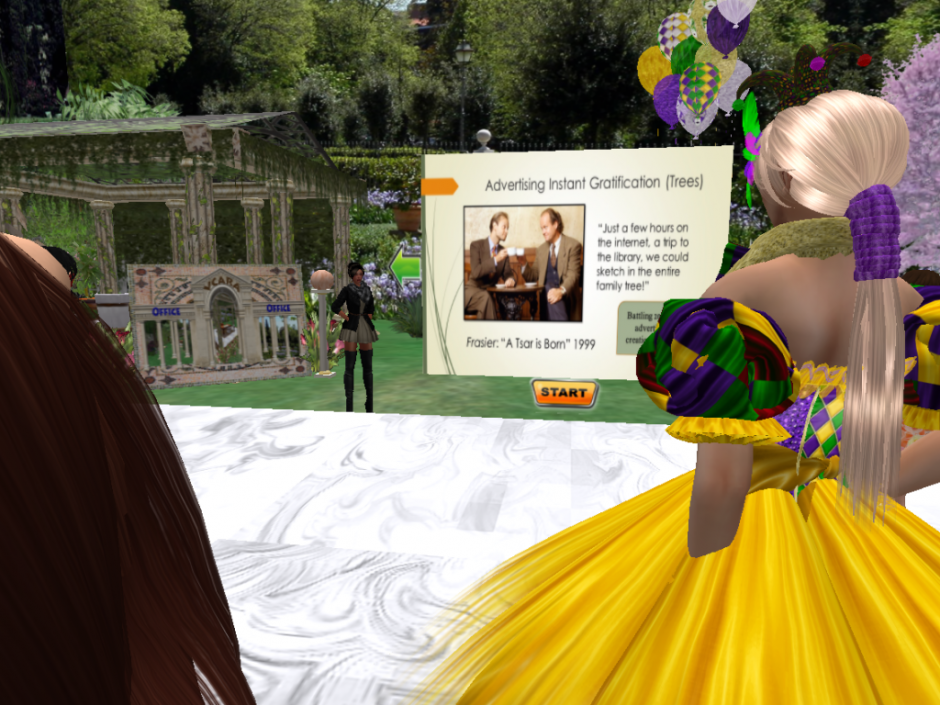 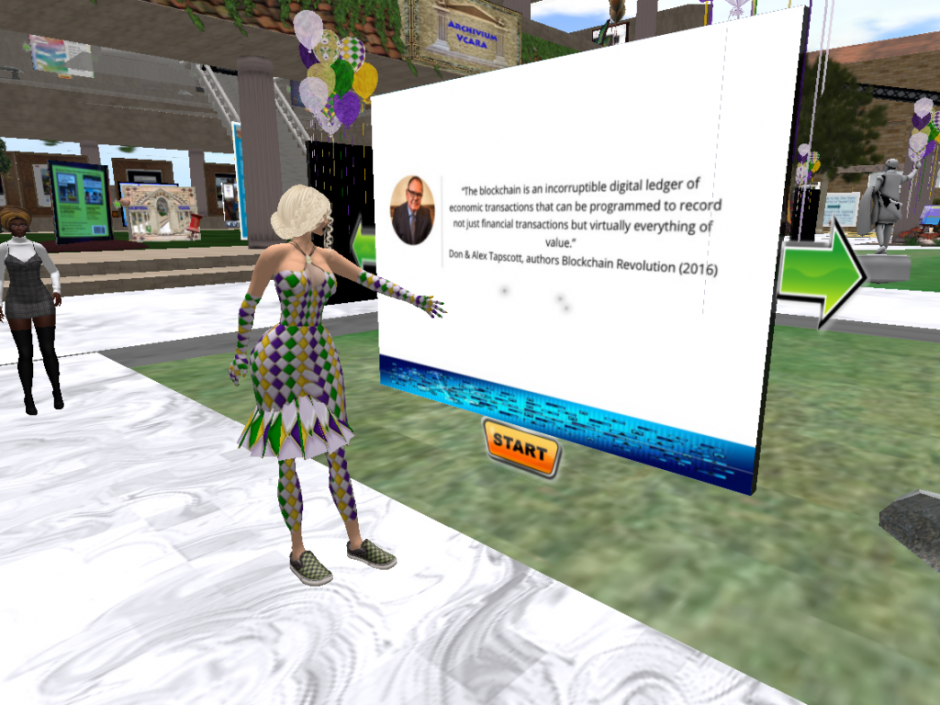 Dr. Pat Franks (Preceptor Amat in SL) presented on Blockchain Technologies for Recordkeeping: Providing a Single Version of the Truth. 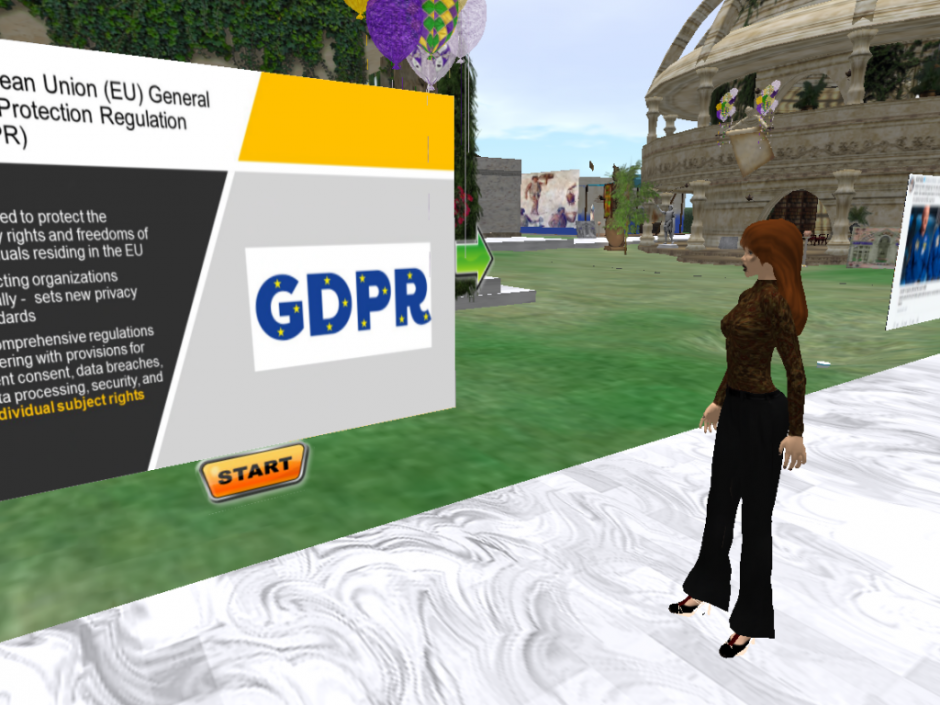 Dr. Lisa Daulby (daulby in SL) presented on the “Right to be Forgotten”: Implications for Evidence and Truth. 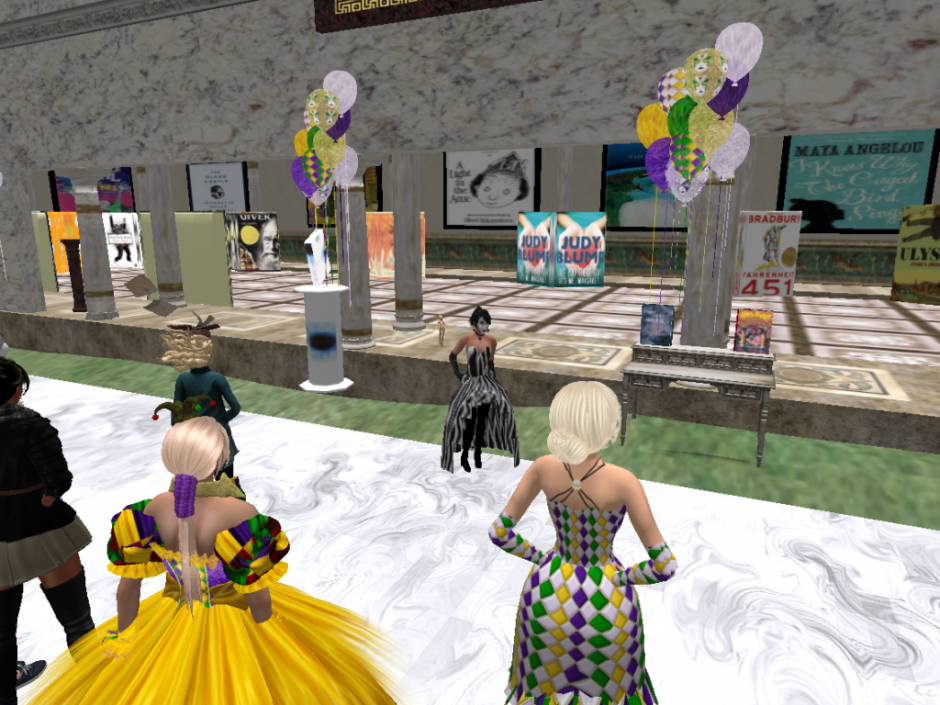 iSchool student Danica Ronquillo gave a brief introduction to VCARA’s Banned Books Exhibit located at VCARA’s U-See-Um. Throughout Spring 2018, iSchool students and alumni (and even Dr. Pat Franks!) learned to build books in Second Life. With these skills, VCARA members created virtual representations of banned books with attached notecards to teach visitors about the books and why, when, and where they were banned. 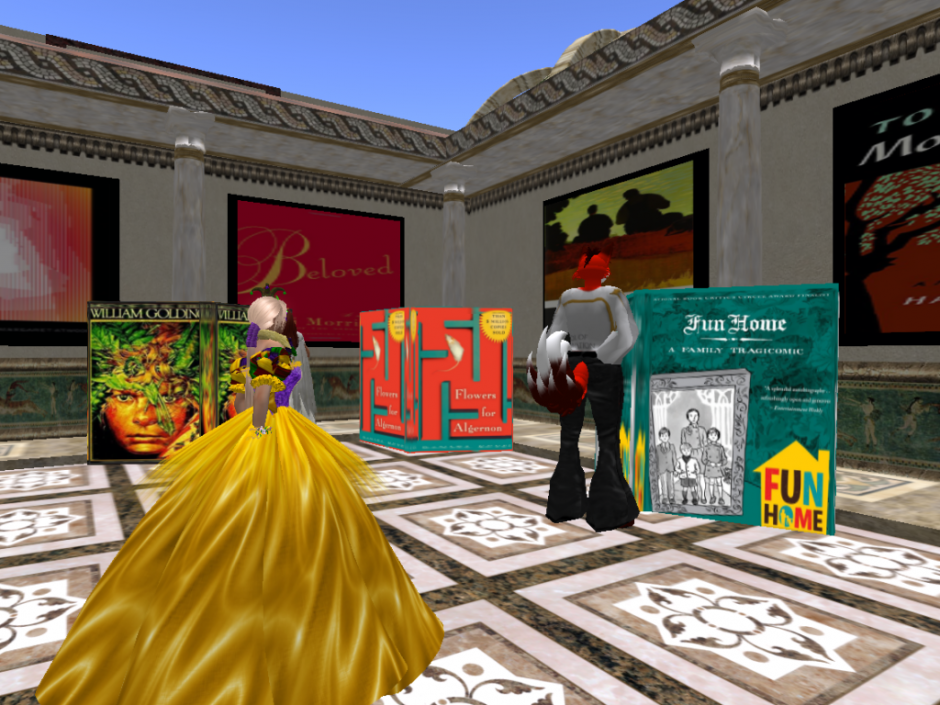 Danica invited participants to browse the exhibit, which will be open through Fall 2018. To explore the exhibit for yourself, visit VCARA’s U-See-Um on iSchool Island in Second Life. 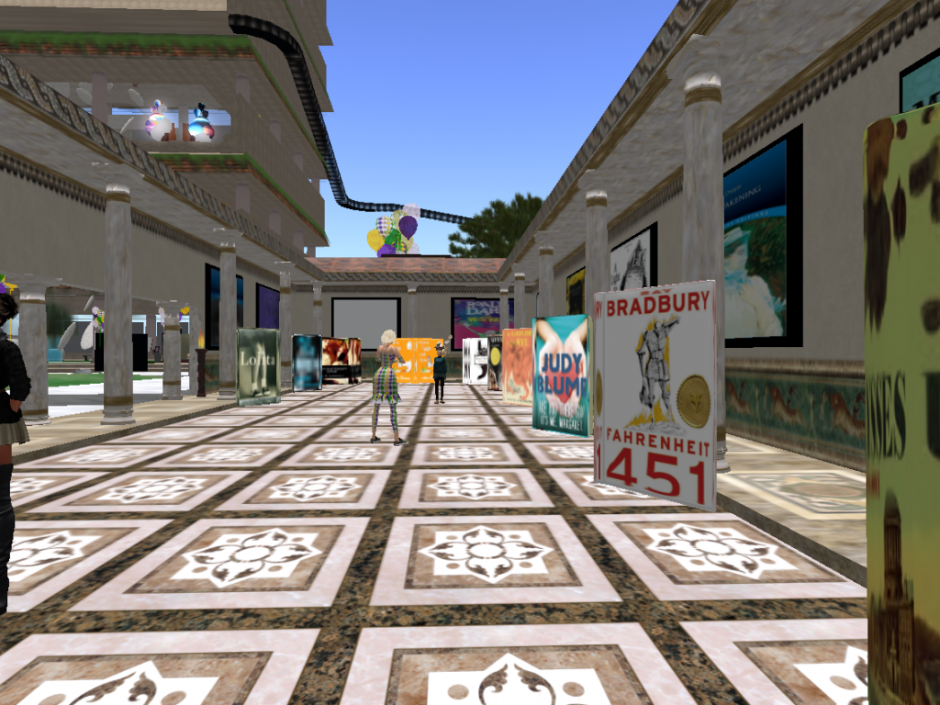 From the main VCARA landing point (SL URL: http://maps.secondlife.com/secondlife/SJSU%20SLIS/43/73/33), walk in the opposite direction of the yellow bricks. Turn left and walk toward the dome. The U-See-Em will be on the left. 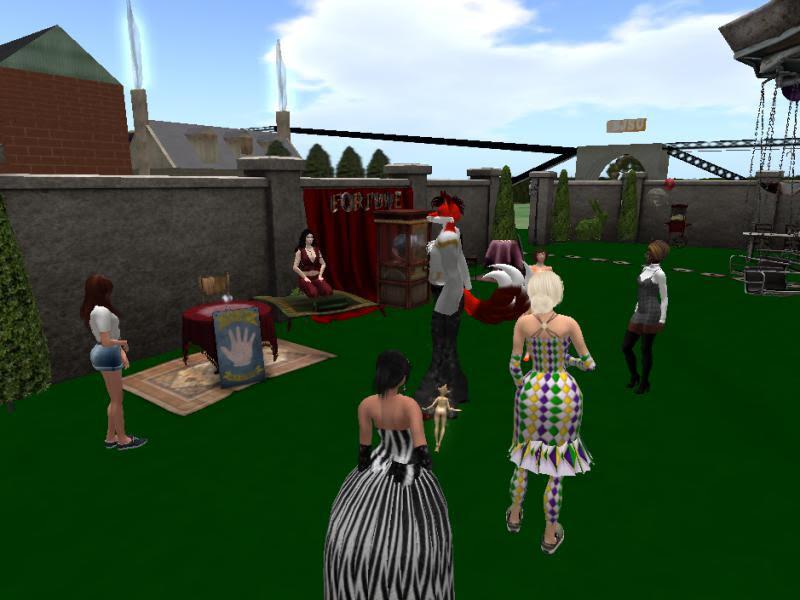 The conference ended with a tour of VCARA’s Harlequin Carnival, a surreal harlequin-themed carnival created by Breiana Theodore (jodielandon in SL), an iSchool alumna. 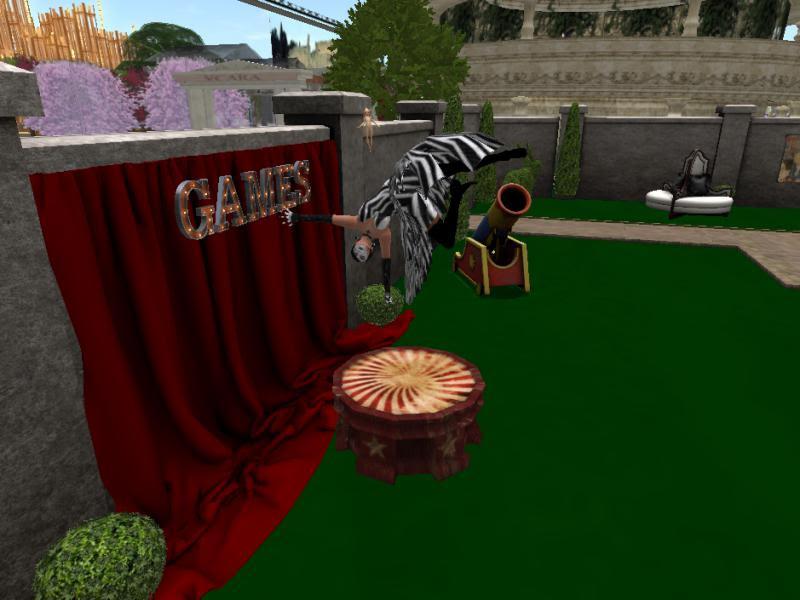 The Harlequin Carnival is located on the iSchool Island in Second Life and tests participants’ perceptions of real vs. imaginary with games and freebies. 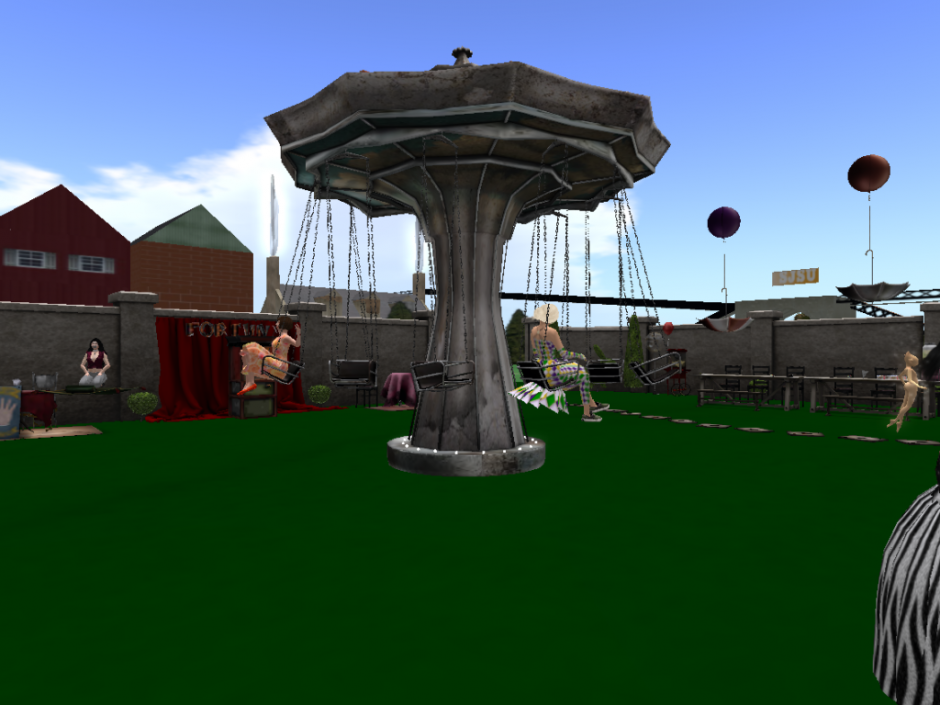 For information about joining VCARA in Second Life, please refer to our VCARA for Newbies blog post. To request an orientation to Second Life and/or VCARA, please email Dr. Pat Franks (patricia.franks@sjsu.edu). To follow VCARA on social media, check out our VCARA on Social Media page.