The panel presentation, “Survey Says! Developing Criteria for VR Courses,” drew a large crowd and was a huge success! While the results of the Survey conducted in Fall 2019 have not yet been published, preliminary findings were shared through this panel presentation.

The panelists were kept on task by moderator Dr. Valerie Hill, the Director of the Community Virtual Library in SL and other virtual worlds. To learn more about CVL, please visit https://communityvirtuallibrary.org/ or message her. Dr. Hill is also a Library & Information Science educator researching the use of virtual environments for learning.

The panelists were Dr. Marie Vans, Alyse Dunavant-Jones, Dr. Pat Franks, Bree Theodore, and Bethany Winslow. Marie is a senior research scientist at HP Labs and a volunteer for VCARA since 2015. Alyse is an independent Digital Curation/Asset Management Consultant and a passionate Virtual World Librarian. As the Community Virtual Library’s Assistant Director, Alyse conducts groundbreaking research in virtual education and librarianship. Pat is the Coordinator for the Master of Archives and Records Administration program at SJSU and administrator for VCARA.  Bree is a volunteer builder for the Community Virtual Library, Nonprofit Resource Commons, and VCARA in SL. She works as a Cataloging and Processing Assistant for the Hoover Institution Library and Archives. Bethany is an instructional designer with eCampus at San Jose State University and a volunteer with the Community Virtual Library. She is the project lead and curator for the Hypergrid Resource centers in OpenSim. 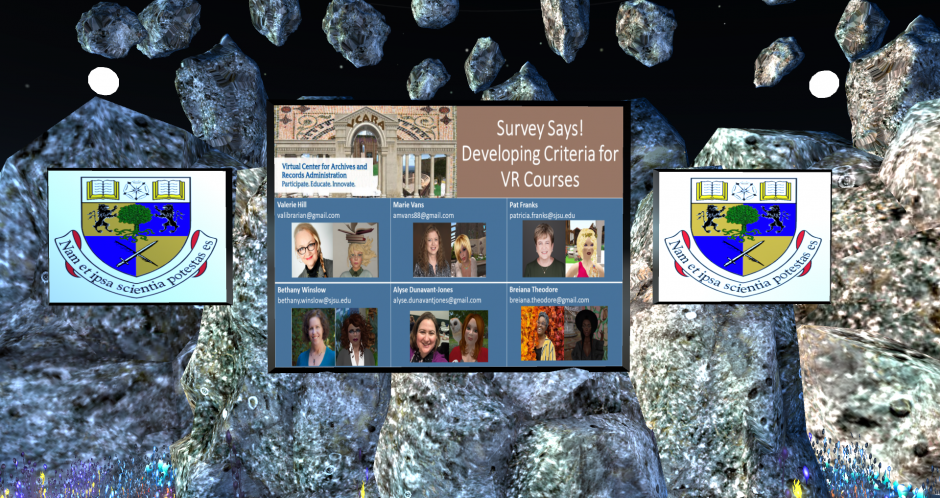 Marie explained the reason for the study: In the fall last year, VCARA started looking into the possibility of creating a space similar to VCARA island in Second Life but in Virtual Reality. We began by looking at several different social VR spaces such as Sansar, AltSpaceVR, and others but quickly realized that each had their own pros and cons and none had all the functionality we thought was needed. This led us to create a survey for a target audience of virtual world educators with the goal of determining a set of criteria that any social VR platform would have to address in order to meet the needs of this population.

Alyse compared the results of the Survey with two similar surveys. The first study was published in 2011, and the second study was published in 2015. VCARA’s criteria lists 29 items total. The 2015 study has 76 criteria, and the 2011 study has 28 criteria. Among other findings, she explained there were 8 criteria that all three studies cited: Accessibility, Build features, Education-Oriented platform, Interact with Creators/Developers, Media In-World, Reliability, Sustainability, and Usability.

Bree compared the results of the Survey with VCARA’s expectations. She explained that, surprising to researchers, 50% of the respondents suggested criteria not included in our list of 29: reliability, viewer functionality (i.e. ability to use other programs outside of a viewer, such as web browsers, email, etc.), and sustainability/persistence of sim.

Pat described the difference between VCARA expectations (customization as wanted) and the results of the Survey (customization as needed). She compared Avatars available to newbies in Virtual Worlds (complex, easily customizable, and diverse–including humanoids and animals) with those currently available in virtual reality (basic, often incomplete, limited selections) and expressed the need for further research to more fully understand what “avatar customization” means to educators. 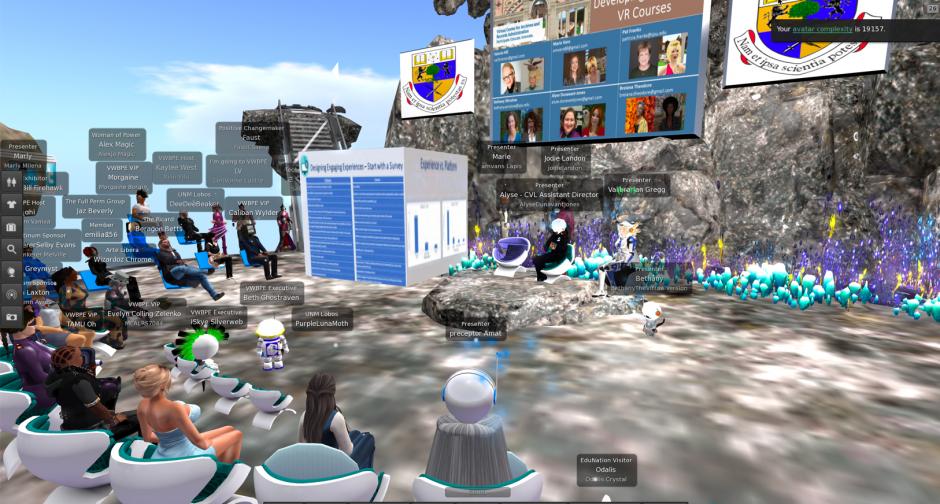 Join the “Friends of VCARA” group in Second Life and follow the VCARA Blog to learn more about the results of this and future research on Virtual Worlds and Virtual Reality in Education.