Greg Lucas, a current SJSU iSchool student and International Advisory Council member, works tirelessly on behalf of California’s system of 1,112 libraries as the state librarian. In between classes and council meetings, he manages 135 employees at the capitol branch in Sacramento, as well as a San Francisco outpost. The California state library collection contains roughly four million items.

And as a primary advocate for libraries, Lucas criss-crosses the state visiting libraries to learn their needs and how the state can help them. “I can’t be a really good advocate unless I watch what libraries have to do, and the challenges they face,” Lucas explains. “It’s one thing to say libraries are essential—everyone says that. But it’s about demonstrating value.” For libraries, “my job is to show that each one of them, every single day, is changing a life.”

Mastering Library and Information Science
With a master’s degree in professional writing and a bachelor’s in communications, Lucas covered California politics and government at the capitol for 20 years as a reporter and through his blog, California’s Capitol. He committed to obtaining the MLIS degree after being appointed state librarian.

“Being in the program at SJSU allows me to do my job a lot better,” he says, “because now I can hear what librarians are saying and understand them better.”

Lucas decided on the iSchool for two primary reasons: the fact that he can take courses all online, which accommodates his busy travel schedule, and because “I like the fact that San José State is a public institution, the oldest public institution of higher learning west of the Mississippi! I’m lucky to be able to be a part of it.”

Now in his third semester, Lucas focuses on courses that will help him do his job, like information and communities, library management and marketing, and archives and records management. “For me,” says Lucas, “being able to be in classes with folks who are going to be the next generation of librarians—it’s not just instructive, it makes me feel better about where libraries are going to go. I get jazzed about talking to other students.” 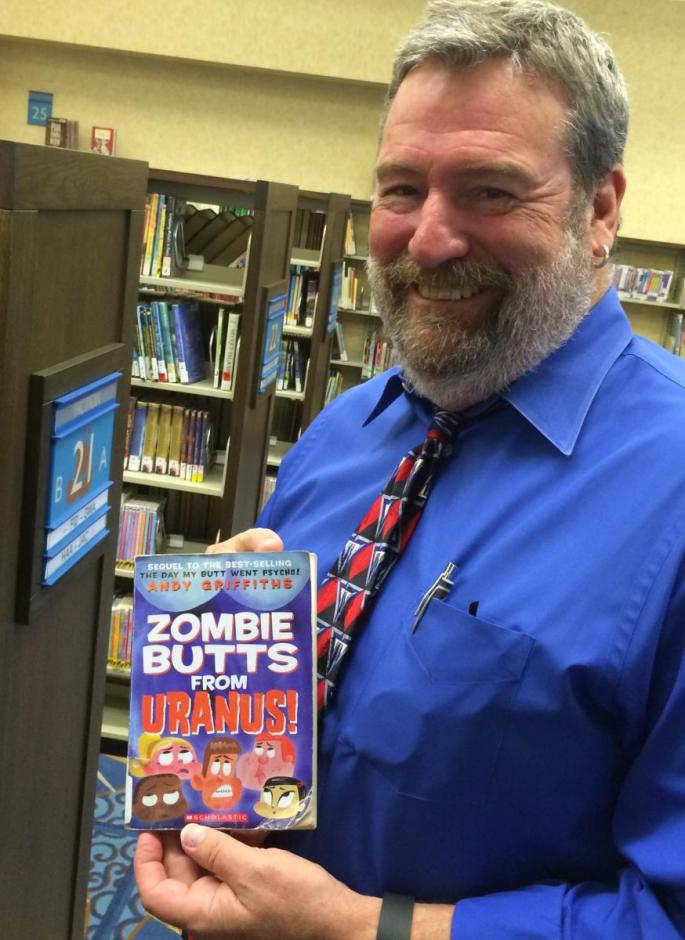 When it comes to libraries, Lucas is clear about where he sees the most cost-effective investment of public funds. “If it was up to me, selfishly making decisions about the most important thing we should focus on—it’s literacy,” Lucas states. “If you teach me to read, I’m never going to not read… I’m going to get a better job and pay more in taxes, the government is going to have to pay less to support me, and if I’m a mom, my literacy level is the number one indicator of my child’s academic success. If it’s up to me, that’s the highest priority.”

However, when faced with overseeing a large state with very diverse library needs, the priorities tend to shift. “In terms of short-term transformative stuff for public libraries… the most important thing that the state library is involved in is hooking up libraries to the public internet.” Lucas says that internet access across the state is slow: 15 percent of libraries—where patrons count on internet access—have worse connectivity than most Californians have at home. That makes library connectivity a priority.

“You can’t walk into a library where the computers aren’t full,” Lucas confirms. “That’s because we live in an information economy, and a segment of the population is dependent on libraries to be able to access that.”

And then there are the immediate priorities that California is working on to ensure access to all in libraries. Lucas notes that for National Library Week, Governor Jerry Brown established three goals: “To make sure every kid going to school has a library card; to make sure, statewise, the literacy level is at least a fifth-grade proficiency; and to make it so that you can use your local library card in any library in California. Those are doable things,” Lucas believes.

We Need Diverse Libraries
“Libraries now are community hubs,”  Lucas notes, “and you can see their value outside the library walls. More and more, they tailor the services they provide to the community in which they’re located. There’s no other part of government that’s responding as nimbly and creatively to public needs.”

In an extremely diverse state like California, where hundreds of languages are spoken, each community’s needs are different. Lucas’s favorite example of this diversity involves a librarian, a cultural event and a dessert.

“I go to a library branch in mid-Wilshire, Los Angeles: It’s tucked into a neighborhood, 5,000 square feet,” recalls Lucas. “The head librarian Maddie’s parents are from San Salvador; her husband is Quechan Indian. The number one [library] patron group is Mongolian, then Indian, and then Bengali.

“So Maddie tells me about her husband going to a Bengali community event in Koreatown, and when they begin playing live music, her husband says, ‘I swear they’re playing Old Man River in Bengali.’ Turns out that one of the leaders of the revolution was friends with [African American entertainer and activist] Paul Robeson, so they’re singing his song in Bengali. The music ends, they wheel in the dessert, and a Bengali kid says, ‘Tres leches! My favorite dessert!’

“It’s pretty awesome,” Lucas says proudly, “and it’s nice to be a part of that.”

Back
This item appears in:
This community profile has been archived and may contain content that is out of date.