“I found every one of the instructors [at SJSU] to be intelligent, knowledgeable and excited about the field. I especially found many of the adjunct professors who were actively working in the field helped to share the “real world” of librarianship and added to the experience.”

iSchool graduate and regional library director Eve Melton (MLIS, ’01) has a deep passion for finding information and providing it to the right person at the right time. “We do a lot of reference work in medical librarianship,” Melton says, “and that really appealed to me about the field in general.” She continues, “I also love that this is an ever-changing field, with new ways of doing things, new ideas to put in place, and that each day of work is different.”

Having already graduated from SJSU with her bachelor’s in Communicative Disorders (Speech Pathology and Audiology), the move to the School of Information was an easy one to make. Says Melton, “I actually found that I enjoyed the research and information gathering [my bachelor’s] degree required, so much so that I was teaching fellow students how to use the library to retrieve documents!” A housemate of hers attending SJSU’s MLIS program suggested medical librarianship as a new direction for her ongoing studies. “He was right,” says Melton, “so I applied for the graduate program in Library Science.”

Although Melton and Bielman graduated before the MLIS program became 100 percent online, Melton speaks highly of all iSchool alumni and the skills SJSU’s online program instilled in them during their time here. “Most of our colleagues,” says Melton, “became adept at learning and working online as they pursued their studies. This is especially true of our most recently hired librarians in northern California, Quincy McCrary (MLIS ’10) and Tenisha Jones (MLIS ’16). Our kpLibraries network has benefitted from their experience as we increasingly interact with patrons and resources online.”

Melton, as well as iSchool alums Gonnerman and Chandrika Kanungo (MLIS ‘95), have been with Kaiser for more than a decade, and have experienced the two “different worlds” of working as a librarian. kpLibrarians are able to work across geographic distances to conduct committee work online with their kpLibrarian colleagues;  iSchool alumni Peggy Makie (MLIS ’05) heads the marketing committee and Carolyn Salcedo (MLIS ’06) co-chairs the training & outreach committee.

Over the past five years, the network has expanded with the help of Melton, Bielman and all the KP librarians from a loose cooperative of medical librarians to a streamlined network of four geographic units with unified services. 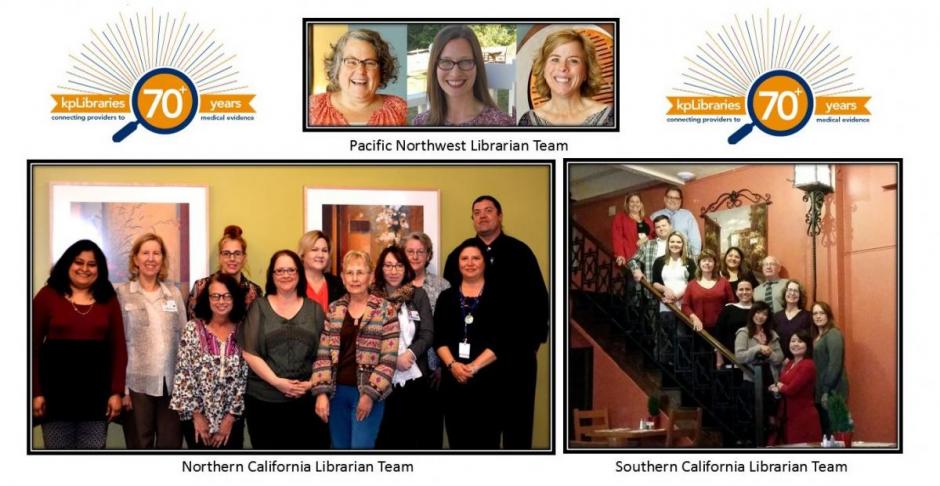 A Celebration of Librarianship 70 Years in the Making

This year, kpLibraries is marking more than 70 years of continuous librarian service to Kaiser Permanente clinicians and other employees. They invite everyone to join the celebration by  visiting this timeline of changes in librarianship since the 1940s. “[Everyone] can see how changes in communication have affected library services and resources as well as the practice of medicine,” says Melton.“Librarians have contributed to the success of the Kaiser model of health care from the organization’s founding; in addition to supporting physicians in delivering evidence-based care, they have played important roles in patient education and nursing advancement. One of our librarians, Lyn Fischback (MLIS ’08), runs the library at the newly accredited Kaiser School of Allied Health.”

Part of the celebration is looking back over the achievements of “We appreciate the value that Kaiser places on professional librarian services, and in recognition of the close ties between the kpLibraries and the iSchool, we have funded an annual scholarship for the past decade. We want to let students know what a rewarding field medical librarianship is. As kpLibrarians, we also take pride that one of our medical librarian forebears, Ysabel Bertolucci, who had a 40-year career with Kaiser, is now memorialized with a Medical Library Association award for professional excellence in her name.”

Melton’s role in the celebration and timeline was crucial, though she would give all kudos to the anniversary committee, which included librarians from all over kpLibraries’ service areas. Says Melton, “My role focused on making sure that we were sending the right message—that the items we highlighted not only focused on the library, but showed the integration of library

services with the growth of Kaiser Permanente.” Melton also wanted to be sure that the timeline focused on the librarian and not just the physical libraries. “It’s important,” urges Melton, “as rapid change happens that we balance the ‘library as a space’ with importance of the expertise of the librarian.”

As for Melton’s future? She’s spent 11 years with kpLibraries and it doesn’t seem like she’s ready to leave anytime soon. “During [my time here],” Melton says, “I have really focused on bringing our entire team together as a unit, streamlining our daily work and focusing on providing the best customer service experience possible. We have implemented new technology to centralize our questions coming into our libraries, while still maintaining a physical presence and personal touch in our libraries.” Melton has also encouraged her team to bring outreach into their facilities and not tie themselves to their desks. “It is imperative that I keep the mission of Kaiser at the forefront,” Melton says, “and use this mission coupled with the library’s mission to ensure that we are providing our patrons with the right information to make evidence-based care and leadership decisions.”