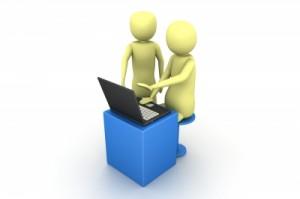 Research assistants at the iSchool have amazing opportunities to gain essential skills for the workplace, work with a team of fellow students and faculty, and be a part of something new, innovative and exciting. Research assistants work closely with iSchool instructors, staff and other information professionals, gaining workplace skills and sometimes a modest income (some assistantships are paid and some are just for experience) while they work on their degrees. These positions can be quite competitive, attracting many qualified applicants.

A total team of fourteen students spent the four years on the research project “Making Space for Young Adults in Public Libraries: Establishing a Research Foundation,” (funded by a federal Institute of Museum and Library Services National Leadership grant) led by iSchool Associate Professor Anthony Bernier, and can attest to the fact that they are well prepared to compete for appointments as information professionals.

Real-World Research
The “Making Space” study examined current practices for designing young adult spaces in nearly 800 of the nation’s new and recently renovated library buildings. Using multiple research methods—surveys, ethnographic studies, and the replication of physical space in virtual Second Life environments—the researchers analyzed elements of young adult spaces that were determined to be important by librarians and YA themselves.

Students on the research team worked together, collecting and interpreting data, writing and editing manuscripts for peer-reviewed publications, and drafting reports for funders and grant partners. “Making Space” started originally as a three-year grant research project that was later extended an additional year and completed in November 2014.

Zemirah Lee, an iSchool grad from July 2014, worked as a project manager on “Making Space” and was part of a group of research assistants who presented at the Library 2.013 worldwide virtual conference, sharing what it was like to work with professional researchers.

“The application process was good practice interviewing for jobs in the future!” says Lee. “I was incredibly fortunate to have had the opportunity to work with Dr. Bernier. He gave me plenty of real-world training, but was always conscious of the fact that I was still a student and still very new to the field of librarianship and research.”

Students also got plenty of real-world experience meeting crucial deadlines, working with a team and doing scholarly research. The “Making Space” team’s work was featured in, among other articles and presentations, “YA Spaces and the End of Postural Tyranny,” (July–August 2014, Public Libraries), a peer-reviewed publication from the Public Libraries Association.

“Our team has articles already either published or accepted for publication in four peer-reviewed publications, and has already made, or had accepted, presentations at six conferences, including two international conferences,” reports Bernier. The team succeeded in publishing twice (in successive issues!) of Public Libraries, for a largely practitioner audience. It also published findings in the top-tier academic journal Library Quarterly, among others. In addition to local and regional conference presentations, the team’s work was also presented at the International Federation of Library Associations (IFLA) in Lyon, France, in 2014. In several of the local and Library 2.0 conferences, students presented team findings themselves.

Mara Cabrera, for instance, who graduated in May of 2015, not only presented a poster session at the 2014 California Library Association, but also helped draft and edit manuscripts and reports to make sure they met the strict standards of the publications to which the team was submitting. Student assistants also had the opportunity to work with esteemed professionals who are experts in the subjects they are researching.

“Besides Dr. Bernier, three other faculty and professional scholars were involved,” says Cabrera. “I had the opportunity to work with all of the investigators and their respective research assistants. This was very gratifying, as I was able to learn about the different aspects of the project.”

Real-World Job Skills
Research and project management skills, as well as the opportunity to work with a wide range of people from all over the country, prepared students well for their job searches and subsequent appointments. Cabrera’s skills, as well as her bilingual heritage and previous schoolwork, made her a very competitive candidate for her recent appointment as the bilingual/teen librarian at Southern California’s Santa Monica Public Library.

Lee, after landing a very competitive one-year appointment at the University of California, Irvine, is now the education and outreach librarian for students in the nursing and allied health fields at National University in San Diego, California. She credits her research assistant experience as the reason she was offered that job.

“The hiring committees are always interested in hearing about my direct experience working as a project manager on a federally funded research team,” says Lee. “I’m fairly certain that my experience has only made me a more interesting candidate uniquely positioned to take on the responsibilities of being an academic librarian working closely with faculty and students in a research capacity.”

And you can’t beat the reference on your resume. “Because I was able to work so closely with Dr. Bernier, he could speak to my productivity, my professionalism and my work ethic,” notes Lee. “He’s been an excellent reference for me, and was contacted both times I was offered a job since graduating with my degree.”

Deepening the iSchool’s Research Community
During the duration of the four-year project, and in addition to Lee and Cabrera, research assistants on the project also included Jonathan Pacheco Bell, Lori Harris, Yvette Khalafian, Meghann Kuhlmann, Collin Rickman, Joy Rodriguez, Julie Whitehead, Antonia Krupicka-Smith, and Pam Okosun. In most all of the instances in which research assistants graduated and went out onto the job market, each reported being offered the first position they sought. While the coincidence of these recent graduates being quickly hired does not necessarily explain everything leading to their new appointments, the pattern certainly suggests that students with field experience in research do substantially improve their competitive profiles.

When looking back on the entire project, Bernier offers, “It was my pleasure working with such a fine team of iSchool research assistants. The relationships built among and between these students, graduates and faculty will serve each of us long into the future. Beyond that, the School’s research community was deepened, and the profession’s ability to increase library spatial equity for young adult users was dramatically advanced.”